Thom Tillis In Talks To Prevent Another Trump Coup 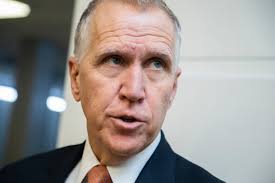 Sen. Thom Tillis was outed as being part of a bipartisan group of senators discussing changes to the 150-year-old Electoral Count Act, presumably to clarify procedures so that another Donald Trump can't lean on his vice president to throw out electoral votes.

Can't say I'd be opposed to such a reform, so good on Thom Tillis for learning at least one lesson from DJT.

But it comes out that the discussion was the bright idea by Republican senators to distract the Democrats from pressing for a voting rights law. "Here, take this little piece of anti-Trumpism, and then shut the hell up about keeping the right to vote easy, free, and fair!"

The bipartisan group of senators was convened by that champion of women's rights, Sen. Susan Collins of Maine, who's always eager to spoon pabulum. Her guardianship of women's rights got us Brett Kavanaugh and Coney Barrett, so we should quake with fear that she might turn her hands to voting rights.

The whole gambit appears really a means to entice Democratic senators Joe Manchin and Sinema away from doing anything foolish for voting rights -- like ending the filibuster to pass the law. Reforming the Electoral Count Act might give Manchin and Sinema some cover for otherwise letting democracy wither for lack of access to the ballot.

As a sure sign that this is all just a Republican feint to distract Manchin and Sinema, both Mitch McConnell and No. 2 Senate Republican John Thune told reporters they are open to changing the Electoral Count Act. Manchin and Sinema say they're only interested in legislation that has bipartisan support, so McConnell's dangle was a slick come-on.

As well as a slap-back at Trump.