Just spent a couple of hours studying the Federal indictment for seditious conspiracy against 11 members of the Oath Keepers (full indictment text here. It's 48 pages of riveting details -- the intensive and comprehensive planning, the weapons, the belief in an evil shadow cabal that's trying to steal the presidency). 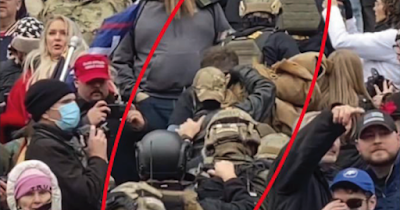 Kept finding North Carolina mentioned: A combat training exercise organized by the Oath Keepers, a "North Carolina QRF Team" (Quick Response Force), the hunt for a boat for a potential amphibious assault across the Potomac River (not making that up) ... it's all detailed below, taken directly from the indictment.

Here's the thing: No North Carolina member of Oath Keepers is ever mentioned by name. In fact, the indictment goes out of its way to keep individuals unidentified. They're not targets of this indictment.

Why not? The indictment makes clear that a group of North Carolina Oath Keepers formed a QRF team and actually occupied a room at a Comfort Inn in the Northern Virginia suburbs, with a room full of heavy weapons, on stand-by for a full-on shit show at the Capitol. But they did not go to the Capitol that day. They went home instead. But before that... Being on military stand-by for possible violence at the Capitol seems remotely conspiratorial to me (and grandly comic, when you think about it).

NC Oath Keepers have evaded conspiracy charges. Or maybe other indictments are coming.

[NOTE: Names in ALL CAPS are codefendants in the Federal indictment. For the complete list of names, and their bases of operation, see this DOJ doc. QRF stands for Quick Response Force. Numbers reference paragraphs in the indictment]

Acts in Furtherance of the Conspiracy

24 On December 12, 2020, the North Carolina chapter of the Oath Keepers held a training session that, according to the leader of the chapter, would be focused on: ‘vehicle operations, road blocks, vehicle recovery, convoy operations, .. . setting up hasty ambushes, and reacting to ambushes, but the first thing we are going to do is fall into formation when we assemble.... TDS ‘planned to, but did not, attend that training.

45. In late December, CALDWELL identified the Comfort Inn Ballston, in Arlington, Virginia, as the location that the QRF would use as its base of operations for January 6, 2021. CALDWELL shared the location of the hotel with WATKINS and the QRF team leader for the Carolina Oath Keepers group that traveled to Washington, D.C., for January 6, 2021. The North Carolina QRF team leader reserved three rooms and paid for one of the rooms; MEGGS paid for the other two rooms. One room was occupied by the North Carolina QRF team; the second room was occupied by the Arizona QRF team, including VALLEJO; the third room was occupied by the Florida QRF team. These QRF teams used the rooms to store and guard the firearms that they ‘and other co-conspirators contributed to the QRF.

52. On the evening of January 2, 2021, MEGGS posted a map of Washington, D.C. in the Leadership Signal Chat, along with the message, “1 if by land, North side of Lincoln Memorial, 2 if by Sea, Corner of West Basin and Ohio is a water transport landing!!” MEGGS continued, “QRF rally points. Water if the bridges get closed.” In response, the North Carolina QRF team leader wrote, “My sources DC working on procuring Boat transportation as we speak.”

60 On January 4, 2021, CALDWELL sent an email to the North Carolina QRF team leader with the subject line, “NEW MAPS RELATIVE TO HOTEL AND INGRESS FOR QRF,” and attached several maps as image files.

65. On January 5, 2021, as MEGGS  and co-conspirators were unloading their weapons, he messaged RHODES, “Yes we are just outside of town unloading at QRF on our way in. Left [the North Carolina Oath Keepers leader's place] at 4:30 am[.]"

Posted by J.W. Williamson at 1/14/2022 12:53:00 PM
Email ThisBlogThis!Share to TwitterShare to FacebookShare to Pinterest
Labels: Trumpism