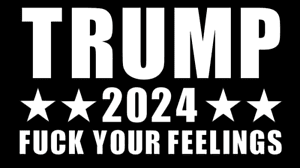 Saw this sign high up in the window of a muscle truck this week. Had just freed my own truck from a foot of drifted snow (I was positive my 4-wheel could handle it), but more difficult was going to be the wall the state snowplows had piled up at the end of my driveway. I torpedoed through it. Later saw the bigger truck with that sign on the way home.
And because I have feelings that are fuckable, I've been meditating on the manner of man -- or woman -- who would display that notice, proudly and prominently -- and what feelings, specifically, he/she intends to fuck.
The bullying instinct in the cult has rarely been better expressed. Don't you try to imagine what this person looks like, the carriage, the shell? A January 6th commando? A cowboy? A steer wrangler? Or your local dry cleaner with something to prove?
It's a man put that up. Because it's a dick-thing, this display of aggression against weakness. (Madison Cawthorn, call your office.) "In red world," says David French, who should know, “you’re weak, you’re a coward” -- as a public accusation -- could end a career or birth a homicide.

In Trumpland this accusation of weakness and cowardice is used as a weapon to keep people in line, because Trump himself defined support for this movement as evidence of your strength.

Trump rallies -- always full to the brim with display -- of swagger, of meanness, of contempt for a long list of enemies, harassment of the press, fist-fights in the audience -- those rallies were rock concerts for a gang that feels slighted and wants to kick ass, who want to take some revenge on late capitalism for putting a new educated class of people ("libs") in charge of everything.

The stereotypical bully intimidates where it's safe to intimidate, the essence of the Trump persona itself. David French: "Trump is a guy who when he can feel like he can intimidate and bully, he’s all in. When there’s real risk to himself, he’s all out."
Or was that guy in the truck with the sign one who would take a weapon to the Capitol? Or to a school board meeting?
Posted by J.W. Williamson at 1/21/2022 12:36:00 PM
Email ThisBlogThis!Share to TwitterShare to FacebookShare to Pinterest
Labels: Donald Trump, Trumpism

It's the projection of teary-eyed child.

Well, you lefties have been fucking his feelings with your leftist claptrap and he's just pushing back.

Don't be so sensitive.

So he's a snowflake lashing out?

Another cry from the fascist autocrats.

"Another cry from the fascist autocrats."

Fascism, from Merriam-Webster:The meaning of FASCISM is a political philosophy, movement, or regime (such as that of the Fascisti) that exalts nation and often race above the individual and that stands for a centralized autocratic government headed by a dictatorial leader, severe economic and social regimentation, and forcible suppression of opposition

Autocrats, also from Merriam-Webster: autocrat: [noun] a person (such as a monarch) ruling with unlimited authority.

Historically, Fascists were also Socialists,such as National Fascist Party in Italy and the National Socialists in Germany.

But modern Democrats fit the bill with their unending struggle to control the economy and individual lives under a leader who is trying to rule by decree, and doing it badly.

You can say what you want about Trump, no body cares. But modern liberals should look in the mirror before throwing words like 'fascist', 'nazi' and 'autocrat.'