What Has He Done Now? (Cawthorn Watch) 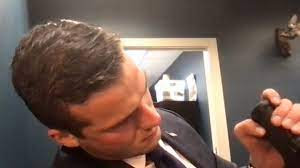 I'm actually trying to swear off the antics of Madison Cawthorn, like I swore off Trump long before he went down a loser, but when the ox is in the ditch....

Clowning on our dime.

[Newsweek] Republican Representative Madison Cawthorn of North Carolina was seen cleaning a gun during a three-hour virtual House Veterans Affairs Committee meeting that took place on [Jan. 19, 2022]. The hearing was about military members being exposed to potentially dangerous toxic chemicals.

The 26-year-old Congress member was seen handling a black pistol for several minutes during the testimony of Jen Burch, an Air Force veteran who experienced breathing problems after exposure to a "burn pit" in Afghanistan. At the hearing, she discussed how medical professionals could help assess other veterans who have been affected by the pits.

To defend himself against the charge that an insurrectionist cannot hold office, a legal challenge against Cawthorn's eligibility filed January 10th by a group of NC citizens including a former Republican justice on the state's Supreme Court:

Mr. Cawthorn, 26, who is in his first term in Congress, has denounced the case as an egregious misreading of the 14th Amendment, but he has retained James Bopp Jr., one of the most prominent conservative campaign lawyers in the country, as counsel. [NYTimes]

"Nobody's Afraid of Him"

[Newsweek] Representative Adam Kinzinger called out one of his fellow GOP congressmen on social media [Jan. 11, 2022].

The Illinois congressman, in response to Colorado GOP Representative Lauren Boebert, tweeted, "Trust me here, nobody is afraid of Madison [Cawthorn]. Unless you're a rotted out tree (seriously google that people). Literally you have all built your skills/intimidation up in your own head."

Posted by J.W. Williamson at 1/26/2022 11:51:00 AM
Email ThisBlogThis!Share to TwitterShare to FacebookShare to Pinterest
Labels: Adam Kinzinger, Madison Cawthorn