Mark Walker Stands Up To Trump

Last night in Greensboro, former Republican congressman and Christian pastor Mark Walker announced that he was turning down Donald Trump's offer and staying in the US Senate race. Trump had told Walker that he would endorse him for another congressional seat if he'd drop out of the Senate race, thus clearing the Trumpist lane for Ted Budd, but Walker said no way by the love of God. He's full speed ahead for that Senate seat, but on difficult political terrain, where Budd is supposedly coming on strong (with Trump's blessing and the $$ of the Club for Growth, which is getting his name out there).

Walker threw this event at the Greensboro Auto Auction on Wendover Avenue and drew a respectable crowd.

Bad news for Budd. Potentially good news for ex-Guv Pat McCrory, who according to comments from Trumpists, is tanking in polls while Budd is rising, but whose center lane, country-club vibe still has juice in suburbia and whose name recognition alone made him instantly the frontrunner. The overriding irony is that Budd and Walker are really political brothers from different mothers:

“[Walker's decision] obviously is better for McCrory than Budd,” said Chris Cooper, a political science professor at Western Carolina University. “I think Walker and Budd are competing for many of the same voters. Ideologically they are virtually indistinguishable. Demographically they are very similar. There’s just not much daylight between the two of them, except for Trump’s endorsement.”

If this were the best of all possible worlds (and not the Republican Party under Trump), Walker could draw some distinctions now, create a new identity for people who relish the fighting spirit in their preachers: "I stood up to a would-be dictator because I'm a better man than that." But that would happen in a world that doesn't exist right now.

Walker still might get tough, if he decides to fight like a man with one small stone and a slingshot (or like a wildcat in a toesack). Walker published this photo on his Facebook page with this caption:

Keeping a previous commitment at the Senate Forum in Monroe with Pat McCrory at the Sweet Union Republican Women’s Club. As usual, only one candidate didn’t show. 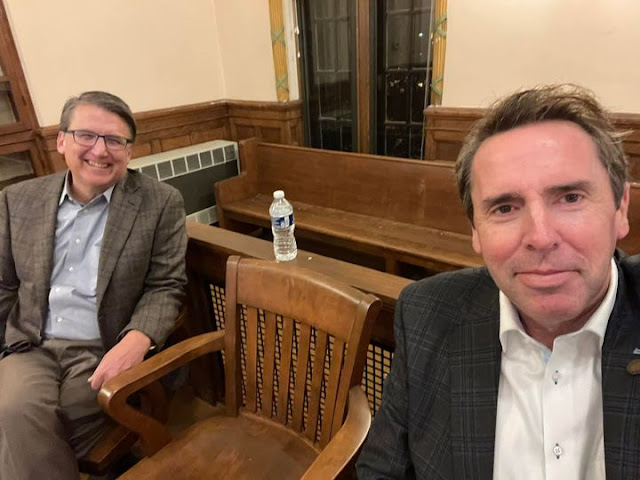