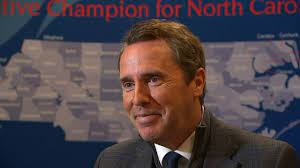 Came across an "exclusive interview" that former Rep. Mark Walker gave Channel 11 in Greensboro, and it appears that Donald Trump's attempt to get him out of the US Senate Republican primary and into a Congressional race instead has failed.

It's all about Walker's faith. "I don't run one way or the other because of the odds or what's on paper," Walker said. "I do something because it's in my heart." (Was he right on the threshold of announcing that God called him to run for Senate?) "I'm all about compassion." But next breath: "We've got to make sure we lock that border down."

Anyway, about that "pressure" from DJT to drop out of the Senate race in favor of Ted Budd's candidacy. Walker admits that he was invited to Mar-a-Lago to meet with Trump by the Club for Growth, the super-PAC that has already pumped $5 million into promoting Budd.

During the meeting, Walker said Trump offered his endorsement to run for the U.S. House in exchange for leaving the Senate race to help Rep. Budd.

"I'm always grateful if someone wants to look at our body of work and say we want you back in the U.S. House," Walker explained. "I don't look at it as pressure. Are they wanting to encourage me to look at a U.S. House seat? Yes. But I don't feel pressure."

Walker is either obtuse about how Trump operates or he's deliberately one-upping the weasel while holding an unmelted pat of butter in his mouth. Indeed, Walker went on to criticize Trump in an oblique way, like any good Baptist pastor might:

As for the impact of Trump's endorsement [of Budd], Walker expressed some regret at the rhetoric from the former President -- and some North Carolina Republicans -- about whether the 2020 was "stolen" or "rigged," claims that have overwhelmingly been discredited and debunked by courts and even GOP-led commissions in several states.

"You can get out there, increase your social media following, say the most outlandish things .... Anybody in the political arena can make an argument. It's what makes the viewer feel good. It's what sells on your cable media. But show me the member of Congress, male or female, that's out there making a difference. A lot of times America doesn't know their names."

I'm impressed that he would be so forthright about the baleful influence on Trump on the prevailing mode in the Republican Party.

His staying in the Senate race gives the advantage to Pat McCrory in the May primary, no?