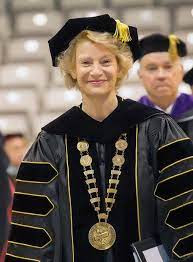 I've been hearing for literally weeks about AppState faculty's beef with Chancellor Sheri Everts about her lax policies regarding COVID, especially considering the current spike in Omicron which has coincided with the opening of the spring semester and in-person teaching. The faculty I hear from -- and see mentioned now in the press -- allege that Everts is unresponsive to faculty questions and complaints and -- worse -- simply absent from any collegial conversation about the best plague decisions. Faculty say Everts now goes into an automatic "defensive crouch" when challenged about anything -- which is just another form of hiding out.

What does the majority of faculty want? A recent faculty survey found that some 63.5% of the 441 faculty respondents said the university’s current COVID protocols will not allow the university “to continue to function normally, in a manner that permits them to provide a high-quality education to all of our students, without disruption, for the full spring semester” [reporter Joe Killian]. And...

Nearly 63% said they think it is either likely or very likely they will have to move their courses entirely online in the next few weeks due to COVID infections.

Overwhelming majorities also supported allowing faculty members to control the mode of instruction in their classes, requiring proof of vaccination or a negative PCR test for admission to all on-campus events and requiring all students, regardless of vaccination status, to undergo testing prior to the start of the semester.

The majority of respondents — 76% — said they would be willing to hold courses online for the first few weeks of the semester, until the current omicron-driven surge of infections peaks.

...so far the university’s administration hasn’t been willing to take any of the suggested steps.

Everts' fear of her own faculty -- or her ingrained disdain for them -- possibly goes back a couple of years (some would say farther than that):

Tensions between Everts and students and faculty at App State have been escalating since August 2020. At the time, the university’s Faculty Senate voted “no confidence” with regard to Evert’s leadership, over the campus’s handling of COVID-19. A no confidence vote is rare in UNC System history. [Joe Killian]

Killian also reports on an open letter that a prof of sustainable development (who also happens to be a former health economist with the Centers for Disease Control and Prevention) sent to all students, alleging that the university is “failing to provide the leadership, guidance and support that students, faculty and the broader community needs”; followed by a mass email response to students from Everts' office alleging that the prof was peddling "misinformation"; which provoked followup questions to Everts' office from the press and from faculty demanding "what misinformation?"; and then finally an attempt at explanation from Everts' flack sent to reporter Killian that does not pass the smell-test among faculty.

Stella Anderson, a professor of management, said that Everts' administration is the worst case of mismanagement she's seen in her 29 years at the university. “It’s an unmitigated disaster,” Anderson said. “The administration and leadership failures and bone-headed communication is really astounding .... I’ve been at the table for a lot. I know good management and leadership and I know when I’m not seeing it.”

Sheri Everts is not about to buck the real bosses.

Hegemony, incidentally -- the word -- is just a fancy academic way to say "the power derived from the inability of any group to think and act independently."