Madison Cawthorn Sues the State Board of Elections 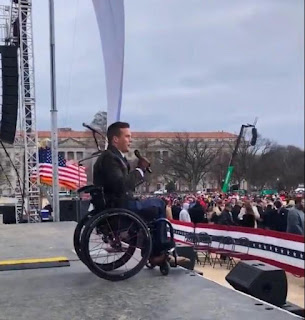 That human cherry bomb Madison Cawthorn is making full use of the high-powered Republican lawyer he hired, and yesterday he sued the State Board of Elections (SBOE) in Federal court, arguing that his own Constitutional rights are being infringed by any potential investigation of his involvement in an insurrection.

The Cawthorn complaint is a doozy and is indeed signed by attorney James Bopp Jr. but also by North Carolina power attorney Josh Howard, whose name may be familiar to those who followed the great Watauga County voter suppression gambit of 2013 (which extended itself into many years following), while Howard was chair of the SBOE. Howard is also famous to us for once joking out loud that he wished Watauga County could be ceded to Tennessee.

To tell the truth, the challenge to Cawthorn's candidacy based on Sect. 3 of the 14th Amendment has seemed like a stretch to me (one who doesn't know the law or how lawyers think), and Bopp and Howard are defending Cawthorn in Federal rather than state court because they're raising constitutional issues of their own, primarily freedom of speech and due process. From my quick reading of the lawsuit, they sound like they have a solid argument. Here's their "Prayer for Relief":

1. Declare that the Challenge Statute is unconstitutional under the First Amendment because its “reasonable suspicion” standard is insufficient justification to trigger a government investigation.

3. Declare that the Challenge Statute is also unconstitutional under Article 1, § 5 of the U.S. Constitution because Congress is the exclusive judge of the qualifications of its Members.

4. Declare that the application of Section Three of the Fourteenth Amendment to Rep. Cawthorn is prohibited by federal law.

5. Preliminarily and permanently enjoin Defendants from enforcing the Challenge Statute against Rep. Cawthorn and disqualifying him from being a candidate for Congress in North Carolina.

6. Award all costs and expenses of bringing this action, including attorneys’ fees, costs, and expenses; and

7. Grant any other relief this Court deems appropriate.

The Cawthorn challenge might get thrown out before it even gets to the SBOE's appointment of an investigating panel.

Posted by J.W. Williamson at 2/01/2022 11:53:00 AM
Email ThisBlogThis!Share to TwitterShare to FacebookShare to Pinterest
Labels: Joshua Howard, Madison Cawthorn

The only argument that truly appears to be a strong one is point 2. I dunno about most of the others except the first point.

Sorry, Charlie (Cawthorn), most investigations begin with a 'reasonable suspicion'.