The Arc of Nathan Tabor 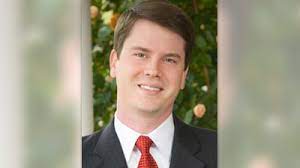 Nathan Tabor is currently in jail in Brunswick County, with a list of charges I'll get around to summarizing below. Way back in 2004, Tabor ran as a young Christian conservative against Virginia Foxx in the Republican congressional primary, the year that Foxx took the 5th District seat she still holds. Tabor came in fifth out of six. He had been endorsed by the NC Right to Life and by the Rev. Jerry Falwell (no, really), who actually called Tabor "a young Jesse Helms." The photo here is from that period in Tabor's life.

He did his best to live up to Falwell's compliment. He was particularly unbending on the issue of abortion. He constantly modeled outrage over what women might do with their bodies, coming out of a general contempt for "women's rights." He ran as though Virginia Foxx was faaaar to the left, at the vanguard of bossy liberal women who were going to destroy Christian principles. He had attended Pat Robertson's Regent University and followed the Gospel of "let your women keep silence." He published The Conservative Voice, was kind enough to put me on his email list, so I regularly expressed my own outrage at his preachments. I wrote a lot about Tabor after 2004.

Tabor went on to chair the Forsyth County Republican Party, ran unsuccessfully for town alderman in Kernersville, and attempted to file in 2012 for the 6th District congressional primary but got to the Board of Elections after the deadline.

Currently, his estranged wife says he's addicted to drugs and always on the verge of financial disaster. Which perhaps explains how his current incarceration got started. He was arrested earlier in October by the Ocean Isle Beach police department, along with the Brunswick County Sheriff's office, for stealing catalytic converters from a church, a Habitat for Humanity Restore, and from two different people (some of the goods allegedly stolen at Sunset Beach). (Michael Hewlett, Winston-Salem Journal, has the most complete story on Tabor's multiple troubles.)

One wonders what Tabor was doing at the beach. His home is in Kernersville. Could it have anything to do with this: There was a warrant out for Tabor's arrest in Kernersville on August 21, 2021, on a complaint of cyberstalking filed by his pastor at the Kerwin Baptist Church. (The entanglements get increasingly baroque.) Luckily, the third week in August is the perfect time to go to the beach! But the details of his arrest suggest he was also close to destitute. And then there's what his wife wrote when she filed for complete custody of their 16-year-old daughter: “Defendant has become addicted to drugs, spending thousands and thousands of dollars on drugs.”

Added to the charges of outright theft: allegations that he made threats against his mother-in-law and other family members in Catawba County in an attempt to get more than $200,000 and that he harassed his pastor in Forsyth County, accusing the pastor of embezzling money from the church. He made sexually-explicit comments to both the pastor and his wife. The pastor filed for a restraining order against Tabor in August.

Mrs. Tabor herself filed for a restraining order against her husband after they separated last June, alleging that he had sent a constant stream of harassing text messages, emails, and social media postings. “Defendant is mentally and emotionally abusive to the minor child, including sending email implying the minor child will burn in hell, and ‘I curse that and pray every time you see or touch something you enjoy that you immediately get sick.’ ”

Posted by J.W. Williamson at 10/17/2021 10:43:00 AM
Email ThisBlogThis!Share to TwitterShare to FacebookShare to Pinterest
Labels: Christianity and politics, Nathan Tabor

I’ve managed to follow this story and the real truth is nothing like reported. The wife lied and he is not a drug addict. It will soon come out he never stole anything but he did give over $200k to Kerwin Baptist. I think many at Kerwin will soon be found out along with the wife’s lies. I imagine he will file lawsuits against all those who have propogated lie’s against him. I’ve heard it’s coming who knows? I found out he had a serious neck operation from a car wreck a few years back and was treated with surgery and pain killers but wanted off opioids so he tried legal delta 8. I hear that is where his wife started the lies. Guess we wait and see but this guy is tough and you can bet he will not give up until truth is known. I wondered why all didn’t know Kerwin financials. I remember when a firmer pastors son embezzled several hundred thousand and some guy in church there gave it back. Seems they don’t watch the money. Hope you stay up with this.