Musical Chairs Among the Republicans in CD11 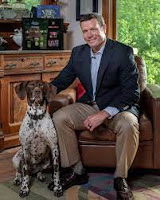 I gave considerable space here to Republican Eric Batchelor, who announced a scant two weeks ago that he was planning to challenge Congressman Madison Cawthorn in the 11th CD Republican primary next March. I was impressed with him. (Kiss of death?) I also expressed the worry that there were already too many credible Republican candidates who planned to challenge Cawthorn. They will divide the vote and allow Cawthorn to survive.

Eric Batchelor just dropped out, evidently agreeing with me:

Eric Batchelor for Congress
@ericbatchelornc
I am suspending my campaign to represent NC 11. To beat Cawthorn, we have to thin the herd. I encourage
@WendyforWNC
,
@CuttForCongress
, and
@Bruce_OConnell
to identify and back the strongest candidate to go forward. We need adult representation in NC11. See you next time.
6:25 AM · Oct 3, 2021·Twitter Web App
Posted by J.W. Williamson at 10/04/2021 07:18:00 AM
Email ThisBlogThis!Share to TwitterShare to FacebookShare to Pinterest
Labels: Eric Batchelor, Madison Cawthorn