Zero 'Class,' But Of Course You Already Knew That 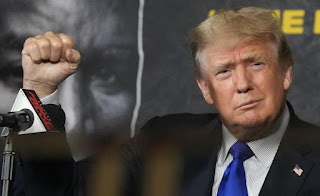 May the statement Donald J. Trump made about a dead statesman haunt him for the rest of his life:

"Wonderful to see Colin Powell, who made big mistakes on Iraq and famously, so-called weapons of mass destruction, be treated in death so beautifully by the Fake News Media. Hope that happens to me someday. He was a classic RINO, if even that, always being the first to attack other Republicans. He made plenty of mistakes, but anyway, may he rest in peace!"

Banned from Twitter for life, Trump issued those words in a statement he hoped others would copy onto Twitter, which many did. Trump did not even try to conceal his envy for a man whose virtues others celebrate -- "Hope that happens to me someday."

Posted by J.W. Williamson at 10/20/2021 10:09:00 AM
Email ThisBlogThis!Share to TwitterShare to FacebookShare to Pinterest
Labels: Colin Powell, Donald Trump

Does this mean he finally recognizes he made Big Mistakes....YUUUGE, in fact?