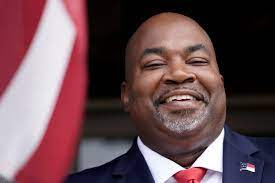 Our lieutenant governor since last year's election, Mark Robinson, has a bully's instincts: pick on the weakest on the playground. Physically, he indeed comes off as a great big bully, and he channels the Trump advice, "never apologize."

He's exactly what the Trump Party likes, applauds, gives money to, and elects. Billy Ball complains that no one visible in the NCGOP has called him out on anything he's said or done:

So stow the shock. The hate isn’t a mistake, it is the message.

Robinson is not, as so many headlines labeled him, “homophobic.” He does not fear queer folks. He hates them. He will be remembered as a bigot, a spiteful buffoon who — best-case scenario — resigns today, even if that’s unlikely.

To call him out would invite bullying, and who wants that? Not Senate President Pro-Tem Phil Berger and NC House Speaker Tim Moore, who resolutely had no comment about Robinson's latest LGBTQ+ = "filth" statements (plural). But the NCGOP issued a message on its Facebook page saying the party "stands with" Robinson. Those are the two acceptable stances now for Republican office-holders watching their party transmogrify into a racist frat-initiation fueled by hatred. In the new Party of Trump it's either say nothing at all or be a lickspittle, groveling enabler of bad behavior and even worse morals. Those Trumpist voters will turn on you and take your hide -- any fellow Republican even thinking about criticizing the current drift.