The Man in the Silly Clothes Backs Down 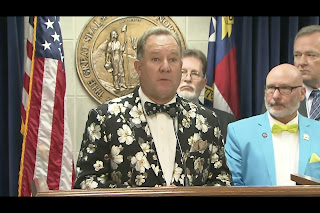 Less than a week ago, Rep. Jeff McNeely (R-Iredell) led two other members of the NC House Freedom Caucus (Rep. Bobby Hanig, R-Dare, and Rep. Larry Pittman, R-Cabarrus) in an unthought-out press conference in which Mr. McNeely put the Durham County Board of Elections on notice that he and other members of the Freedom Caucus would be coming through their doors very soon and that they would be wanting to inspect the innards of Durham County voting equipment for any illegal modems which they claim is the source of most North Carolina voting fraud.

Modems are illegal on North Carolina voting equipment, by law, as is any machine connection to the Internet.

McNeely, dressed like Aunt Bee's best friend, caught some blow-back, including on this site, and according to Laura Leslie, by the time McNeely got back to his office later that day, and had a chance to catch up on the news that he had made, he quickly changed his tune, "saying he would simply drive by the building where the Durham County Board of Elections keeps its voting machines to see for himself whether the machines were secure."