Take Over the Town of Boone? Why, Easy as One, Two Three!

What's emerging in the Boone Town Council elections of 2021 looks for the world like a secret handshake between the administration of Appalachian State University and big real estate developers.

A new political action committee (PAC) has emerged among real estate interests which says it will endorse chosen candidates for the Town Council elections and spend money to help elect them. The PAC is very open about favoring real estate development and also about becoming a political ally of AppState. What? At least one member of the ASU Board of Trustees (Tommy Sofield) was prominent among guests at the PAC's launch. And the PAC has named itself "AppalachianPAC," maybe to help student voters believe that Sheri Everts Knows Best. (Too clever, by half.)

AppState owns some fairly large tracts in Boone that are zoned "U," a Town of Boone zoning designation which means AppState is free to build pretty much anything they desire without a mechanism for public input. Some of the sites on the map below are "U" zones ripe for development. Chancellor Sheri Everts recently sent this graphic to every ASU student, with a lengthy marketing survey: Where would you think you'd like to live in Boone if it wasn't a dormitory, and in what kind of apartment, and would you patronize businesses on the ground floor of your brand-spanking-new apartment building -- businesses including restaurants, five&dimes, dress shops, coffee shops, etc.?

What catches my attention on this map is the inclusion of the old Watauga High School site on Hwy 105. Big site -- huge opportunities. It became ASU property in 2017. The university paid Watauga County $18.3 mil for it. It's a prime spot for something big. 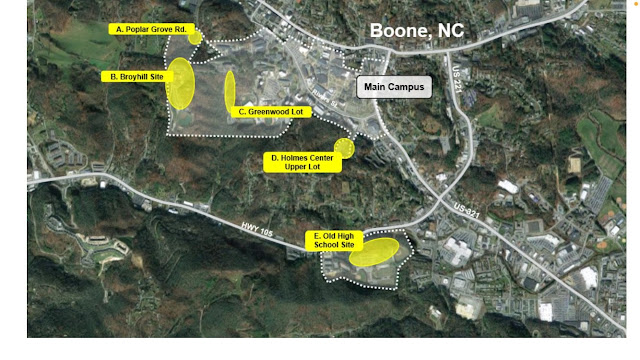 Here following is the top portion of that map that Everts emailed to students, with a direct question: 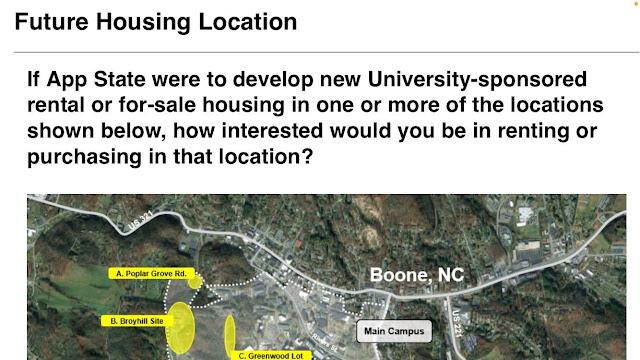 Did you notice that wording: "how interested would you be in renting or purchasing in that location?" Does that raise a red flag for you? AppState wants in the real estate market in a big new way? And suddenly its self-interest in putting a heavy thumb on the electoral scales appears all too obvious.

The AppState administration very recently petitioned BooneTown's planning regulators, and the existing Town Council, to rezone some 8 parcels in downtown Boone from B1 (central business district, with plenty of restrictive regs that developers don't like and which a big powerful university doesn't like either) -- they asked to be rezoned to the much freer "U" zoning. You remember the building of the new College of Education in 2007 smack in a residential neighborhood? That was because it was zoned "U" and the Town of Boone couldn't stop it. You dig me?

To its credit, the sitting Town Council turned down all but one of those most recent AppState rezoning requests. They did approve one, the rezoning of the old Legends nightclub site. That rezoning to "U" makes some sense, especially if you thought the Legends site would make a logical and appropriate spot for a new university dorm. But, kiddies, Sheri Everts ain't interested in any more stinkin' dorms.

Just incidentally, all five of those sitting Council seats are up for election next month -- all five. The stakes couldn't be higher, the temptations more biting, to try to take over that Council and change BooneTown's look even more forever.

Posted by J.W. Williamson at 10/03/2021 10:42:00 AM
Email ThisBlogThis!Share to TwitterShare to FacebookShare to Pinterest
Labels: Appalachian State University, Town of Boone, zoning

In other words, to end everything about Boone that any of us ever liked. My (original) hometown was taken over by its large state university...it is now unlivable - heavy car traffic, endless student housing, and puking/publicly-peeing university students every night in what used to be a downtown.

One of the chief charms of Boone has been its push for sustainability, and that like-minded students have chosen to stay and build lives here. If Big D Development is our future, that won't continue, and we can all just join in poisoning the planet like the rest of the world. (Take note of the garbage and sewage spills at The Cottages.)

How would these commercial activities not be a blatant violation of the Umstead Act which prohibits government agencies from competing with the private commercial activities of North Carolina citizens? Umstead has some exceptions but mainly for selling students food and books. See https://generalcounsel.ncsu.edu/legal-topics/business-matters/umstead-act/#:~:text=In%20general%2C%20the%20Umstead%20Act,66%2D58(a).

Breaking News: NIMBY Boone homeowners complaining about aesthetics while rents skyrocket for everyone else because of restrictive zoning…

Give it a rest Pam. You claim to be progressive but really it’s you and your cabal of geriatrics who are keeping the city back.