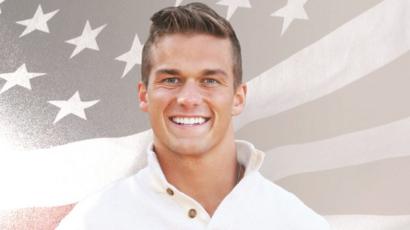 Madison Cawthorn, the 25-year-old Henderson County Republican who induced a widespread media swoon by winning the Republican primary for Congress in the NC-11, is not the first American politician to base his electoral prospects pretty much exclusively on his looks, nor will he be the last. He's very aware that he's got head-turning handsomeness on his side. He says in one video I've seen that he used to be 6'3" tall before his automobile crash -- "I stood out," he said. Explains a little the air of privilege that surrounds him, the expectation, despite a tragic car crash, that you can take what you want because. More than one young Christian girl has complained publicly that Cawthorn seemed to think that they owed him some romantic compliance.

He has said that his big ambition is to be the new young avatar for an aging Republican Party, and he told a reporter that his secret weapon is his "packaging."

“...I believe I can carry the message of conservatism in a way that doesn’t seem so abrasive – that has better packaging, I would say, better messaging.”

I'm a very shallow person, I admit, and judge most candidates first by their surface appearance, but it's a trifle off-putting to hear the candidate admit that the surface is what there is. That he seems to think he can sell sandpaper for Kleenex if he's charming and pretty. Cawthorn is all-American boy with the thousand-watt smile, and his political calculation is this: He's pimping policies that no Millennial would select for themselves unless the salesman is a seducer.

He handles himself pretty well in media interviews. He has his talking points down pat. He's never, or rarely, at a loss for words. He knows his role -- tragic young voice of conservatism struggling to his feet to stand up for freedom despite all odds (while the choir at Fox News faints dead away). But when he gets into policy, he fades quickly into vagueness and illogic. He says he wants his main contribution to be the reform of our health care system, based on his own near-death experiences, but his "reform" looks puddle-deep and contradictory to me -- encouraging more competition among insurance companies is going to make health-care more affordable for the "forgotten people"? The "free market" would have healed his wounds faster? I think a wholly unfettered free market might have discarded both Madison Cawthorn and his hospital bed.

He has expressed regret that the Republican majorities in Congress did not repeal Obamacare during Trump's first two years, though he, like his hero Trump, does not have a replacement plan. So his "free market" sloganeering looks not only shallow but also quite harmful.

The evident shallowness makes quite credible the creeping fear that he's aligned with white nationalism, with its toxic disdain for weak and unattractive "cucks," though I've never thought his Instagram photos from Berchtesgaden revealed much of anything other than a touristy bragging about places he's been. Time will tell about all of that, if he should actually make it to Congress.

The knock against him that drew blood is that he deliberately misled about the car crash derailing his coming stardom at the Naval Academy. He admitted in a lawsuit deposition that his nomination for the Naval Academy had been rejected before his car crash injuries. He has since claimed in interviews that he never misled anyone about that. I've gone back and watched his introductory video biography on his website -- which is still there -- and there's no doubt that he intended to mislead people about his supposed admission to Annapolis, supposedly ended by the car crash. There's no doubt in my mind.

His Democratic opponent, Moe Davis, an actual distinguished retired member of the military, called Cawthorn's wrapping himself in tragically aborted military glory as "stolen valor." Cawthorn thought perhaps that he could get away with it. After all, he looked the part of a rising Navy midshipman, didn't he?

Posted by J.W. Williamson at 8/31/2020 09:52:00 AM
Email ThisBlogThis!Share to TwitterShare to FacebookShare to Pinterest
Labels: Madison Cawthorn, Morris "Moe" Davis

Sorry - I dated a few guys like him. Other than his very white teeth, he is NOT (by female standards) that good-looking; his smile looks angry, rather than friendly, and it doesn't really extend to his eyes.

The first time I saw his picture, way before those “bucket list” pics came out, I thought he would make an excellent Rolf in Sound of Music.
https://youtu.be/mRBqmZ0ySa0