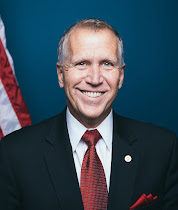 Hat-tip to Paul Blest for his extensive and in-depth appraisal of the entire career of Sen. Thom Tillis, from his days as a town commissioner of Charlotte suburb of Cornelius, to his rise in the NC House, to his current insecure perch in the US Senate.

The following passage focuses on one of Tillis's worst policy initiatives while he ran the Republican super-majority in the NC House, crippling the state's unemployment insurance system:

One of Tillis’s highest priorities was knocking out one of the legs of the New Deal: unemployment insurance. The legislature, with Tillis in the lead, took just two weeks at the start of the 2013 session — the first time Republicans held a super majority and the governor’s mansion — to introduce and pass a draconian unemployment bill that cut the number of weeks the jobless could collect benefits from 26 weeks to 12, and slashed the maximum amount from $530 to $350. When the 2020 CARES Act added $600 a week to benefits for up to 13 weeks beyond a state’s benefits, the jobless in North Carolina were shafted. Where most Americans could claim up to 39 weeks of benefits, those in the Tarheel State were topped off at 25 weeks. Still, Tillis voted to strip those benefits from the CARES package. The vote was tied at 48-48, so Tillis came one vote short of succeeding.

The week of March 28, 172,745 people in North Carolina filed for benefits. Thanks to Tillis, they have long since exhausted their 12 weeks of state benefits, just as the job market is headed for a second nosedive, and Republicans in Congress are blocking efforts to extend the current assistance.

In the middle of this COVID unemployment crisis, it's only fitting and just that the Tillis history on the issue should come back to haunt him.

Posted by J.W. Williamson at 8/10/2020 07:43:00 AM
Email ThisBlogThis!Share to TwitterShare to FacebookShare to Pinterest
Labels: Thom Tillis

Sounds like a feller who will have to wear a mask for personal safety long after the Covid 19 pandemic is over. Maybe he could wear a Papa mask and Richard Burr could wear a Skippy mask just to confuse their victims.