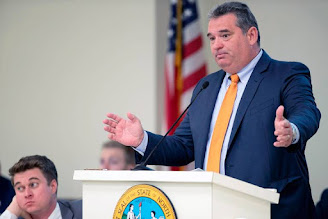 When we covered the sudden announcement by powerful Republican lawmaker David Lewis last July 25th that he was withdrawing from his race for reelection to the NC House from District 53, we said, "It's almost like there's another shoe waiting to drop."

That shoe dropped yesterday when federal prosecutors announced that Rep. Lewis had pleaded guilty to two counts of not filing taxes and making false statements to a bank, in relation to a campaign finance scheme whereby he took money donated to his reelection and used it for personal maintenance. Will Doran reported late yesterday afternoon:

Prosecutors announced shortly after the charges were made public that Lewis would take a plea deal. One of the two charges he faced could have led to a maximum sentence of 30 years in prison. But prosecutors will recommend a much lighter sentence ranging from probation to six months in prison, the plea deal says.

When you're white and powerful, you get deals like that. Just sayin'.

The court document laying out the charges says Lewis came up with a scheme to secretly siphon donors’ money out of his campaign account and put it to personal use.

He reported that his campaign was sending money to the North Carolina Republican Party but in reality, the court document says, he was writing checks to a bank account he controlled. He put the account in the name of a company — which federal prosecutors say never existed — that he called “NC GOP, Inc.” to disguise what was going on.

Several people on Twitter were sympathizing with Lewis this morning because the financial strains on farmers -- which Lewis is -- are sometimes insurmountable and crushing. True dat. Small family farmers get no respect and little help, while huge corporate farms have lobbyists. We get it. While we can appreciate the struggle Lewis says he's gone through, we grow less sympathetic when we remember that he maybe more than most run-of-the-mill Republicans in the General Assembly had a big hand in blocking the expansion of Medicaid -- which would help many small farmers -- and an even bigger hand in gerrymandering the state to keep his stingy, non-empathetic ilk in power.
Posted by J.W. Williamson at 8/21/2020 08:30:00 AM
Email ThisBlogThis!Share to TwitterShare to FacebookShare to Pinterest
Labels: David Lewis

I have no sympathy for Lewis.

Plenty of people have it rough trying to operate a business or simply keep food on the table in a minimum wage job.

But we all have choices - we can operate within the law or we can choose to cheat and break the law.

I'm sorry - because of Lewis's position of public trust, I would have thrown the book at him. He's not just a farmer, he's a representative of North Carolina citizens in the legislature. He broke that public trust.

"If you're white and powerful", imagine the breaks Trump would get if he were found guilty after leaving office.;