The Man Who Is Manipulating the Mail Is From Greensboro

Just across from the second fairway at the Greensboro Country Club is a house some call “The Castle.”

Built for the family that founded Cone Mills, the 15,000-square-foot home includes a pool house and a swimming pool with rock formations created by a designer from the N.C. Zoo. DeJoy bought the house in 2005 for $5.9 million, one of the highest prices ever paid for a house in Greensboro. It’s the house where he cooks gourmet Italian dinners for friends and hosts events for presidents. [NandO] 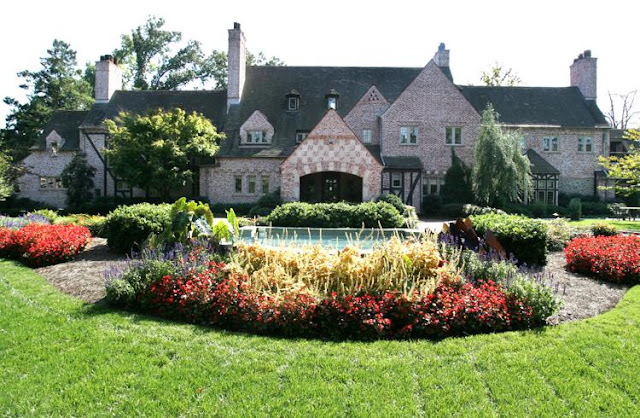 "Host events for presidents" meaning mos def for Donald J. Trump. "In 2017, Trump made his first trip to North Carolina as president for a fundraiser at [the DeJoy/Aldona Wos] home. Since 2016, DeJoy has donated $1.2 million to the president and nearly $1.3 million to the Republican Party" (Jim Morrill). (Paul Blest in his emailed IndyWeek Primer says it's more: "FEC records show he's given nearly $1.8 million to GOP campaigns since January 2019, including more than $1 million to the Trump Victory Fund.") That's just DeJoy's giving. He's coaxed even more out of other well-heeled donors by inviting them to his castle to meet famous people.

And just look what he got out of it! Postmaster General! Appointed a little over two months ago, and look at all the fun he's already having, carrying all that water for Twitterman and sloshing it all over that nice clean floor.

In recent weeks, at the direction of a Trump campaign megadonor who was recently named the postmaster general, the service has stopped paying mail carriers and clerks the overtime necessary to ensure that deliveries can be completed each day. That and other changes have led to reports of letters and packages being delayed by as many as several days.

Record numbers of North Carolinians have already requested their mail-in absentee ballots. Me too. No actual ballots will be mailed until the first week in September, and it's not that delivery that we worry about but rather the one where our filled-out ballot along with the signature of one witness heads for the local board of elections. What worries me most is human nature, the tendency to put off filling out that ballot and getting it back in the mail with that witness's signature, waiting until almost the deadline for finding a witness and getting a proper postmark, and that's when Louis DeJoy will spring his trap.
Now, isn't that a legitimate worry? 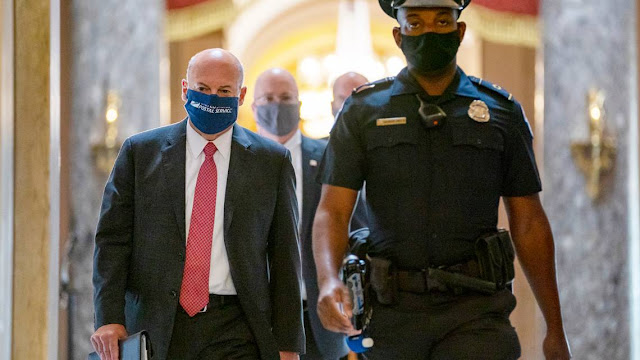 Louis DeJoy, being escorted to a meeting in Nancy Pelosi's office.
Meeting didn't go well. Photo Carolyn Kaster for AP
DeJoy's cover for carrying the water is the claim that he's bringing good business practices to the delivery of the mail. To which Paul Blest replies, "The Postal Service is famously not a business. It's a public service, something that's exceedingly rare in this country, and that's why it's much cheaper to use than UPS or FedEx..." (Indy Week Primer for August 7). Virginia Foxx and other Republican conservatives have long bashed the mail service and advocated for privatization. Trump now has additional motives.
Louis DeJoy Is Married To Another Notorious NC Public Servant, Aldona Wos
When Pat McCrory got to be governor, he had cause to be grateful to the DeJoy household too, and he appointed Louis DeJoy's wife as the head of his department of health and human services. Long story short: Wos ended up resigning under fire, following a Federal subpoena delving into possible criminal misappropriation of public funds and no-bid payouts to close personal and political friends.
Prior to the turning of Pat McCrory's head, the DeJoy/Wos team had turned the George W. Bush noggin, and Aldona Wos got an ambassadorship to Estonia. These guys know how to pay to play.
And if Louis DeJoy can help Donald Trump stay in power, it's sure to be good for business.
Posted by J.W. Williamson at 8/07/2020 09:34:00 AM
Email ThisBlogThis!Share to TwitterShare to FacebookShare to Pinterest

Maintenance of the Post Office and roads is a Constitutional mandate. Article I section 8. Nowhere is it stated or implied that it must be profitable, or self-supporting.