Another benefit of President Obama's first wave of endorsements (see last post down-column) is his calling my attention to other impressive candidates in other places, like the 2nd CD of Arkansas. Democrat Joyce Elliott is running there to unseat three-term Republican French Hill, who squeaked back into office in 2018 against another Democratic candidate by only 2 percentage points.
Watch Joyce Elliott's introductory video and tell me you wouldn't want her in Congress -- with her smarts, her laser focus, her great poise.
Elliott is currently (and since the elections of 2008) a member of the Arkansas state senate, and before that, from 2000 to 2006 she served in the Arkansas state house. She, like the late Congressman John Lewis, was at the spearpoint of racial integration in the South. She was the second Black child to integrate her local public school; her big sister was the first. If elected, she will be the first Black lawmaker in Congress from Arkansas, ever.
She spent 30 years as a public school teacher and was influential on The College Board, becoming the director of its legislative outreach for the Southwestern Region. She credits her success in life to educational opportunities, and she's been a fierce advocate for equal educational opportunities for all.
"On the campaign trail in June, Elliott attended a demonstration against racism in White County, which is more than 90% White, and spoke to attendees in the shadow of a Confederate monument. The November election is a 'chance to change our history,' she told Reuters afterward. 'I really decided I needed to run because I could see a pathway to winning.' ”
The pathway to winning runs through the capitol city of Little Rock, which sits entirely in the 2nd CD. 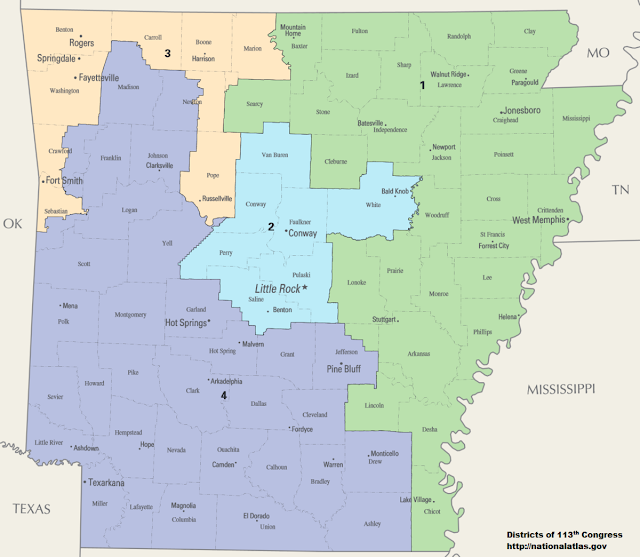 Her boldness in taking her campaign into racist territory in White County speaks to her courage and recalls Howard Dean's gospel of flying the Democratic flag everywhere. Cook Political Report rates the district "Likely Republican" (R+7), but that obviously doesn't scare Joyce Elliott, and she's getting recognition and support from across the country as one of the record number of Black women running for office this year (many of those in North Carolina and in South Carolina).
Posted by J.W. Williamson at 8/04/2020 08:53:00 AM
Email ThisBlogThis!Share to TwitterShare to FacebookShare to Pinterest
Labels: Joyce Elliott