I'm looking at every pooh-bah's available list of "potential" Democratic candidates to take on Republican Senator Thom Tillis in 2020, and I can't help noticing that generally they're all men (and more about them in a later post). There are outstanding women in politics in this state -- let alone thousands who haven't established a public presence or profile yet -- who are not only qualified for that high office but also potentially very electable in a new world wrought in response to Twitterman. He's the first cause of global politics change, and I think we know by now that previously improbable movements can coalesce quickly around the right candidate, all other things being basically even.

The women written about here aren't necessarily interested in running for higher office. I get that. But if not one of them, then someone like them should be thinking about it.


NC House Rep Pricey Harrison (HD61) -- An attorney, Harrison represents much of Greensboro. First elected in 2004 in HD57, redistricted into HD61 last year, she won over 70% of the vote this past November. She's an environmental champion. She's also advocated for medical marijuana laws. She volunteered repeatedly for other candidates up and down the ballot, campaigning even with a broken leg and wrist.

She's often described with the bland phrase "civic leader," which hardly does her justice. She has served as president of the Julian Price Family Foundation and in leadership with the NC Environmental Defense Fund and the Piedmont Land Conservancy.

She was very outspoken about the dangers of coal ash contamination after the Dan River spill seven years ago. She is a whistleblower of the best kind, someone in public office where her voice and her votes might make a difference. She's on top of issues, knows her facts -- especially about North Carolina's vulnerability to catastrophic climate change -- and she was outraged by the Republican super-majority's "unprecedented" power grabs.

She's good on her feet. Here she is addressing protestors against a pro-fracking bill outside the General Assembly in 2014:


Charlotte Mayor Vi Lyles -- Lyles won election in Charlotte only a year ago, first defeating incumbent Democratic Mayor Jennifer Roberts (who had the bad luck to preside over the city during the Republicans' bathroom bill debacle), and then going on to get almost 60% of the vote against the Republican candidate. Lyles is the first African American woman in that seat, though not the first African American (Harvey Gantt had that distinction back in the 1990s). Previously, Lyles had worked for the city of Charlotte as a budget analyst and assistant city manager. She ran for city council and won in 2013, was elected mayor pro-ten in 2015, and following the shooting of Keith Lamont Scott in 2016, "she proposed a seven-point plan to reduce racial and class divisions in the city," parts of which were passed by the council. 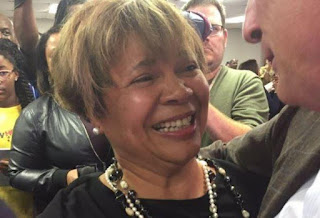 Recently (December 2018) the Charlotte Observer said, "She has been the mayor Charlotte needed." She has received praise from Republican conservatives as a "graceful" peacemaker between city factions. "Her style is so even-handed and thoughtful and positive," said NC Senator Dan Bishop, a Mecklenburg Republican.

The Observer described her as "cautious" and as something of a brake on the city's leftward propulsion under a new and very diverse city council (ever since the bathroom bill, pushback by progressives has become more assertive).

Some -- many? -- progressives were pissed that she advocated for the Republican National Convention in Charlotte in 2020 ("it will bring more risk than payoff," editorialized the Charlotte Observer), but by her own lights -- she was elected to advocate for the municipality, after all -- a national convention even of idiots will benefit the economic development of the city.

She's calm, composed, and well prepared as she defends her decision on the RNC before a Democratic Women's group of Mecklenburg County:

NC House Rep Deb Butler (HD18) -- An attorney long active in Democratic politics, Butler represents much of Wilmington and has become a prominent whistleblower about the toxin Gen-X in the Cape Fear River. She also fought the highly controversial House Bill 2 ("bathroom bill") in 2016. Tragically, Butler's wife of three years, Anni Parra, died suddenly and unexpectedly four days before New Year's. She was 52. This is perhaps the worst timing possible for this discussion, and I hope Rep. Butler will forgive me. 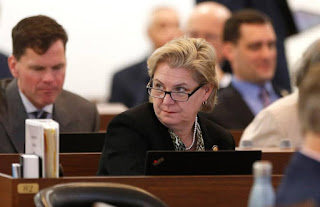 Butler's fight for LBGTQ rights predates her service in the House. She ran in 2012 for the NC Senate (SD8) and lost to creepy Thom Goolsby. When Democratic Rep. Susi Hamilton (HD18) resigned early in 2017 to take a cabinet post, Governor Cooper appointed Butler to her seat. Though she's new to the body, she immediately stepped out (both literally and figuratively) as an effective voice of resistance to the Republican super-majority. In November's election, she took over 60% of the vote.

Butler started posting commentaries as she walked around the General Assembly building, or in near neighborhoods, where she could get some fresh air and cool off -- talking clearly and effectively, with appropriate passion and resolve, about what the Republicans were up to that day. (I wish I could post one here, but I can't. They're on Butler's Twitter feed. Her most recent, on December 7, is riveting. The Republicans were overriding Governor Cooper's veto of the VoterID Bill, trying to distract everyone from the real and present ballot fraud down in NC-9, which would not have been stopped by voter photo ID, and Butler had had it.)

Here's her "walk and talk" from 13 June, when she was leaving the General Assembly at 11:30 pm, after hours of Republican bullying. She was flourescently a-light about what had just gone on.

Aside from proving she's pretty damn agile -- I can barely walk, let alone walk while videoing myself! -- she has the presence and the smarts to start a movement. Short version: I want to listen to her.

She told the Port City Daily, "I've been accused of being perhaps too straightforward sometimes, but I just don't know any other way. There is a lot that needs fixing in North Carolina and in Washington, and I think people are tired of the arguing and are looking for intelligent, forthright, and candid representatives who focus on solutions instead of division and churning everyone up all the time."

She supports an independent redistricting commission to end the practice of office-holders' choosing their voters. She supports restoring the tax rebate program for the film industry, which worked for so many years to build businesses in Wilmington and across the state and which the Republicans repealed. The film industry took its business to Georgia and elsewhere.