Looking Forward to the Colorado US Senate Race in 2020 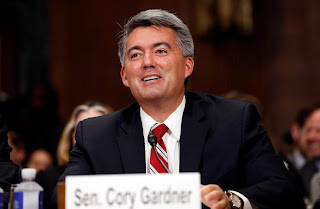 Yesterday, the new Democratic majority in the US House passed the exact same government funding bill that the Republican majority US Senate had passed (unanimously!) back before Trump pulled the rug out and shut down a large chunk of our Federal compact. Last night, Senate leader Mitch McConnell immediately said the Senate would not be considering that legislation and no other legislation unless Trump supports it first. No, really.

Under Mitch, the Senate is no longer a coequal branch of government.

Meanwhile, some of Mitch's Republican troops in the Senate are beginning to sweat, particularly the ones who have to run in 2020 and most especially the ones who represent states that Hillary Clinton carried in 2016. Like Cory Gardner of Colorado. He sez, “I think we should pass a continuing resolution to get the government back open. The Senate has done it last Congress, we should do it again today,” he said. That was yesterday afternoon even before the House passed its bill.

Cory Gardner is nervous because there's a whole bench of good Democratic candidates who might challenge him in 2020. The date for the Colorado Democratic caucus/primary hasn't been set yet, but could come as early as the first Tuesday in February. Yikes. That's barely a full year away from right now!


Here are some of the potential Democratic challengers: 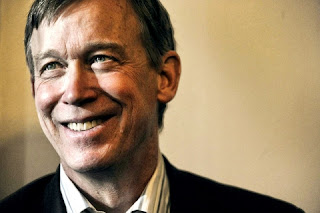 John Hickenlooper, recent two-term governor of Colorado who before that was elected twice as mayor of Denver and got named in 2005 by Time magazine as one of five top mayors in the US. He's a trained geologist (see fracking, below) and has worked for the oil and gas industries. Hickenlooper started the Wynkoop Brewing Company, the first and quite successful brew-pub in Denver. As a commercial brewer perhaps it isn't surprising that as mayor he opposed the marijuana legalization referendum in Denver in 2006, and as governor he opposed the constitutional amendment legalizing marijuana for the whole state in 2012, though he acquiesced in enforcing those innovations and accepting their legality. (Hickenlooper's had a knack for presiding over major economic bonanzas without necessarily helping those bonanzas happen.)

"Hickenlooper’s record on oil and gas is mixed. On one hand his administration has added and strengthened regulations to protect health and the environment. The state’s ground-breaking methane rules are a prime example. His regulatory agencies also rolled out a litany of other smaller measures, often leading to grumbling among operators. As a former oil and gas geologist, Hickenlooper is also a savior of the industry, helping to keep a fracking ban off the ballot in 2014 and speaking out against a similar measure in 2018." (Colorado Public Radio)

Fracking? Say it ain't so!

But he's progressive in a courageous way on some issues: In a state with a strong hunting tradition, he signed a law requiring background checks on all "firearm transfers" in the state, which would naturally give gun show operators -- not to mention the NRA -- a peptic flareup. He signed the law in his first term and still won reelection, while three Democratic state senators did not fare so well. They were either recalled or forced to resign by angry gun-owners in their rural districts.

He's also not a fan of capital punishment.

Hickenlooper is striking because he could probably win the Colorado Senate primary easily, with his record and his name recognition, but he's got stars in his eyes for the presidency. Yes, he's been to both Iowa and New Hampshire. Would someone please dump some ice water on this guy and wake him up? The presidency is out of his reach, but the Senate seat squats there waiting for him.

If Hickenlooper doesn't see the light, or doesn't see it soon enough, there are other viable Democrats waiting for their moment....

US Rep Earl Perlmutter, who represents (since 2007) the 7th Congressional District, which encompasses much of the northern and western parts of the Denver-Aurora Metropolitan Area, including Golden, Lakewood, Arvada and Westminster.


“There are a couple of giants in the Democratic Party that could shape this race, and Ed Perlmutter’s at the top of the list,” said Craig Hughes, a Colorado Democratic campaign strategist.

Perlmutter has attempted a run for statewide office before. For about three months in 2017, he was the presumptive front-runner in Colorado’s gubernatorial race. However, he bowed out after colleague Rep. Jared Polis jumped into the race. At the time of his exit, Perlmutter said he didn’t have the “fire in belly” to run a statewide campaign.

That's not a good sign. "Fire in the belly" (and not the peptic kind) will be necessary to win a US Senate race.

He's a consistent progressive, with zero ratings from conservative groups and 100% (or near it) from liberal groups including Planned Parenthood and NARAL-Pro Choice America. 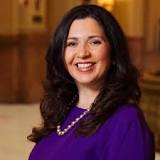 Speaker of the Colorado House Crisanta Duran ... a four-term member of the Colorado House from Denver and the first Latina Speaker of the House, elected unanimously by her fellow members a year ago. She's been very critical of Twitterman over his immigration biases, declaring he's on the "wrong side of history." Colorado has a sizable Latin American demographic, and if trends from 2018 hold strong, the white voting public seems more inclined to put more diversity into high office.


Said Micha Rosenoer, the executive director of Emerge Colorado, a political group that trains women to run for office, “Crisanta would be a formidable opponent for Gardner — she’s young and Latina, was extremely successful in the state Capitol, and represents a demographic [that Trump] has never been able to connect with.”

"There is a question of how much appeal and name recognition she has outside of Denver, her home base." And is she too progressive?

Nora Olabi profiled her in July 2018:

"Crisanta Duran was raised to be skeptical of politicians. Her father served as the labor union boss of the United Food and Commercial Workers Local 7, and her mother worked on affordable-housing development for the State of Colorado. Every night around the dinner table, Duran remembers, her family would talk about the failures of government to stand up for hardworking and disenfranchised people.

"That drive to fight for working people, Duran says, motivated her through law school, her professional career as a union attorney and in her decision to eventually seek office."

A Duran candidacy (she hasn't declared any intention to run yet) could take off like a rocket in a primary, especially if her male competitors were pallid white guys. Her biggest white guy competitor might be this man... 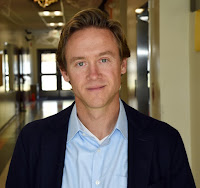 Former state Senator Mike Johnston ... young and ambitious, with already a national network of wealthy donors who support his philosophy on public education. He was term-limited out of the Colorado Senate in 2016, subsequently ran in the Democratic primary for governor in 2018, and came in third.


"But his campaign, which focused intensely on unaffiliated voters and took him to all 64 counties, gives him statewide name recognition among the party’s base. The former Denver lawmaker is a native son of the Rocky Mountains, which lends him credibility with voters who live in the mountains and on the Western Slope." (Nic Garcia)

“He’s the kind of candidate Republicans would prefer not to face,” said independent consultant Eric Sondermann. “His challenge is going to be the Democratic primary.”

Because...? The state's public school teachers don't like him a little bit because of the controversial teacher evaluation system that he designed and pushed through the Colorado legislature. I know nothing about that evaluation system, so I can't comment on whether the teachers and their union have grounds for their spite against him.

I note, however, that he's been a hands-on teacher with a commendable track record:

"After graduating from Yale, he joined Teach For America, a nonprofit that recruits college graduates to teach for two years, typically in low-income neighborhoods. Johnston taught in Mississippi and wrote a book about the students he met." (ChalkBeat) He later got a master’s degree in education from Harvard and a law degree from Yale and was hired in 2005 as a new high school principal and became an education consultant to the Obama campaign in 2008.