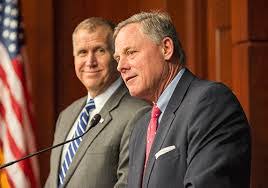 Let the Russians do as they please! This roll call vote in the US Senate says so much about the values and allegiances of our two senators from North Carolina.

Those sanctions on Oleg Deripaska and his companies, imposed in 2018 by Trump's own Treasury Department, were justified, according to the Treasury's own language, because Deripaska had furthered “the Kremlin’s global malign activities, including its attempts to subvert Western democracy.”