Democrats Who Don't Show Up Need a Spanking 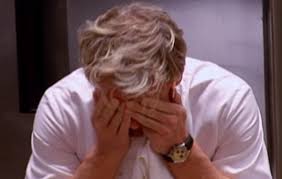 When I first heard that six NC House Democrats didn't show up for an override vote on December 27 and that their six votes could have upheld Roy Cooper's veto of the elections law and ethics bill that just incidentally will keep secret any allegations of campaign finance violations brought against members of the General Assembly -- why, it was face-palm time.

Here's what we know: Republican leaders needed three-fifths of everyone present on the House floor, not the whole chamber, to override that veto. In other words, 60% of those members present. With several Republican absences on December 27 (along with those six Democrats), the House's override vote majority was 68 out of 108 total, or 63%. The six missing Democrats would have shifted the total number present to 117, which means that 68 votes for the override would have fallen short. Even with one Democrat, Duane Hall, voting with the Republicans (out of spite?).

Time for public shaming of those six hooky-playing Democrats:


Cecil Brockman (HD60), Guilford County -- He's made no acknowledgement of his error nor apologized for it on his Facebook or Twitter feed.

Susan Fisher (HD114), Buncombe County -- She's made no acknowledgment nor apology on her Facebook page.

George Graham (HD12), Lenoir and Pitt counties -- He was defeated for reelection in November by Republican Chris Humphrey.

Jean Farmer-Butterfield (HD24), Wilson County -- Nothing on her Facebook page.

Are you kidding Me? This is beyond ridiculous. What the hell are we fighting for out here? I stood in the cold and rain knocking on doors and passing out voter guides for this?

This may not be as clear a face-palm as it looks. If all the Dems had showed up, the House leadership would know this, and they could have held the vote until they rounded up the missing GOPers. If every House member were there, they would have needed 72 votes to override. They only needed to squeeze 4 yes votes out of 5 absent GOPers (not to mention the 3 who voted against) to still override. I wish all the Dems had been there, but I'm willing to give them the benefit of the doubt on this one.
https://www.ncleg.gov/Legislation/Votes/RollCallVoteTranscript/2017/H/1356

But Barry, the post was about showing up. It's really hard to show up and be invisible, regardless of head counts and whether they might have possible or absolute results.

Doesn't matter what the GOP leadership was going to do. Show up and present a united front. Better to go down in flames and shown the voters and other members of the NCGA that the Democrats are united and serious