What follows is pure speculation. None of these gentlemen have spoken publicly about running for the US Senate. We wrote previously about three North Carolina women who might make good candidates too against Thom Tillis. 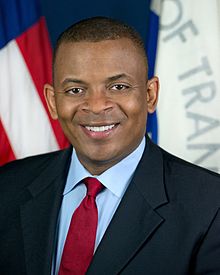 Anthony Foxx, former Charlotte Mayor and former US Secretary of Transportation -- First elected to the Charlotte City Council in 2005, Foxx quickly rose in four years to be elected as Charlotte's youngest mayor in 2009 (and its second African-American mayor). Coming into office at the height of the Bush recession and in a city dominated by financial service corporations (banks) that were laying off hundreds of workers, Foxx earned props for dealing decisively and effectively with the crisis. Wikipedia: "From a transportation perspective, Foxx helped salvage the city's largest single capital project - the Blue Line Extension, which was threatened by lower than anticipated sales tax revenue; helped structure an innovative finance deal to complete the city's outer beltway; launched a new streetcar; and put forward the largest injection of street bonds in the city's history." Those successes earned Foxx his nomination as President Obama's second Secretary of Transportation in 2013.


Foxx is a native of Charlotte, graduated from Davidson College, and went on to get his law degree from New York University. From the beginning, he was always destined for greater things. After law school, Foxx returned to Charlotte to work at the Smith, Helms, Mullis, and Moore law firm, and left to become a clerk for a judge on the Sixth Circuit Court of Appeals in Cincinnati. Later he worked for the US Department of Justice and the US House of Representatives Judiciary Committee. In 2004, he was the campaign manager for Representative Mel Watt. In 2001, he returned to Charlotte to work as a business litigator for Hunton and Williams. Good background for fundraising.

Currently (according to Linked In), Foxx is chief policy officer and senior advisor to the president and CEO of Lyft, the "on-demand transportation services" company that's a chief rival to Uber. Foxx published an essay after taking that job, an essay full of big picture assessments about our runaway urbanization and the innovations in transportation that could make those urban landscapes better for struggling people. It's an essay by a man with vision committed to a new job.

That job relocated him to New York City, not an indication he was (or is) considering another political gambit in North Carolina. But he did return to Charlotte in January of 2018 to deliver a well received star turn at a Community Building Initiative luncheon that wowed Taylor Batten of the Charlotte Observer:

"This was a Foxx who had clearly found his voice. His 34-minute speech was at times personal, at times funny, at times serious and at the end, prescriptive. He delivered a message with the kind of wisdom and authority he should have done more frequently as mayor. It was the kind of message, in fact, that you’d want to hear from your U.S. senator."

After that speech, Batten asked Foxx about the Senate, and Foxx "deflected the question." Has a year changed his mind? 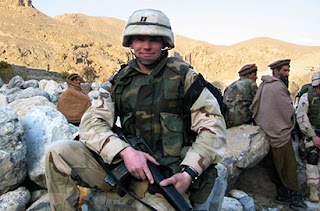 NC Rep Grier Martin (HD34) -- Another Davidson College graduate, where he joined ROTC and began a very long commitment to the US Army. He subsequently received his law degree from Chapel Hill. After 9/11, Martin joined the Judge Advocate General Corps and was deployed to Afghanistan. In 2004 he ran successfully for the NC House and was reelected three times through 2010 before the Republican super-majority in the General Assembly redistricted and "double-bunked" him with fellow Democratic Rep. Deborah Ross. Martin stepped aside in 2012 for Ross to take the seat. In 2013, when Ross stepped down to run for the US Senate against Thom Tillis, Martin was appointed to fill out her term. He has won reelection ever since, even while remaining a lieutenant colonel in the US Army Reserve.


Martin is one of the "best liked" members of the General Assembly, a highly respected "straight-shooter." When he stepped aside for Deborah Ross, Democratic leader Joe Hackney said of Martin, "Rep. Martin has been one of the hardest working legislators in the General Assembly during his four terms in office. His ongoing military service allowed him to quickly establish himself as an expert in legislation to protect and serve the fighting men and women who protect and serve us. At the same time, he was a progressive voice in efforts to protect our environment, women's rights and to keep North Carolina a state that leads instead of follows."

The otherwise even-tempered Martin famously flared publicly against Trump in July of 2018 after the president's remarks in Finland (while standing next to Vladimir Putin and bashing American intel personnel). "Don't come back" to the US, Martin tweeted at the time. "You are not worthy to stand on American soil made free by the sacrifices of men and women better than you.”

Here he is in a better frame of mind, introducing himself:

Mayor Allen Joines, Winston-Salem -- Joines has been the highly successful and popular mayor of Winston-Salem since 2001. He's often run unopposed, as was the case in his last reelection in 2016. No one challenges him. He seems perfectly fitted to the job. No one would dare call Mayor Joines a progressive Democrat. He's pro-business, a pillar under the Chamber of Commerce, and he's cautious with liberal causes. (Forsyth County leans Republican. It had the worst Democratic performance last November of all heavily urban NC counties.) The Mayor's views on some social issues are largely opaque. He also seems to lack a politician's ambition for higher office, not a bad thing in an effective office-holder but a deterrent to running for something like US Senate. Joines was heavily recruited to run against Virginia Foxx in the 5th Congressional District, and was prominently mentioned for Governor in 2016, but he has resisted recruitment. Perhaps he's a hard-headed realist, also not a bad trait. 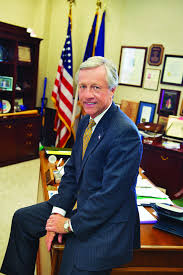 Joines is credited with presiding over the transformation of Winston-Salem from a seedy tobacco plant into a bio-tech research and medical innovation hub that is a rival to Duke University Hospital complex in Durham. An expanding 200-acre research complex—dubbed the Wake Forest Innovation Quarter—employs more than 3,100 in 65 companies and five academic institutions, and was preparing in 2016 to more than double its footprint. It wants to be a coming rival to the Research Triangle Park.

This is good ... or bad, if you're a critic of Joines's interlocking relationship with the high-rollers. Joines has been the paid leader of the Winston-Salem Alliance, a non-profit coagulation of some of Winston-Salem's most influential businesses: "Serving as mayor and president of the alliance has allowed Joines to take a very hands-on role in attracting businesses and gaining a statewide reputation for economic development deals." Some see these relationships as a political machine and those deals as fundamentally corrupt. C.P. Tew wrote in "The Winston Watchman":

"Basically, anyone who is anyone in Winston is somehow connected to Allen Joines through the W-S Alliance or a variety of other non-profits and business development groups that Joines is connected to. Most people in Winston don’t know or don’t care that their Mayor gets his six-figure salary, not from the people of Winston, but from the richest group of people in Winston -- the Winston-Salem Alliance."


NC Senator Jeff Jackson (SD37) -- Jackson may have already been cursed with "front-runner" status in the race to replace Thom Tillis. He earned that label but has not yet felt the burden of it. Nested in a heavily tilted Democratic Senate district in Mecklenburg County, Jackson chose to help other candidates. Eleemosynary good works. He criss-crossed North Carolina raising money as part of the "Break the Super-Majority" project, while also probably laying tracks for 2020.


He's young and photogenic. He's consistently raised his profile since he won appointment in 2014 to fill out the unexpired term of Sen. Don Clodfelter. Jackson went on to win his first election in 2014 and two more since then. He's been a good debater in the NC Senate, shaming his Republican colleagues for emulating Democratic tyranny from years past rather than rising above it. This video is from the 2015 debate on the Republican budget:

Jackson enlisted in the Army Reserve following 9/11 as a private, was deployed to Afghanistan in Operation Enduring Freedom and served a year there. Back home in the states, he attended law school at Chapel Hill with the help of the G.I. Bill. He remains a captain in the Judge Advocate General Corps of the Army Reserve. Prior to his appointment to the NC Senate, he served as as assistant district attorney in Gaston County.

In the Senate he's repeatedly introduced legislation to end gerrymandering and install an independent redistricting commission. 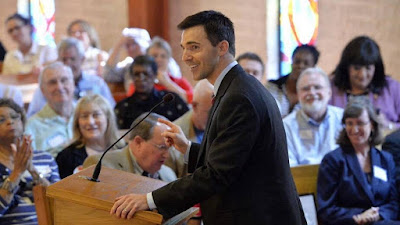