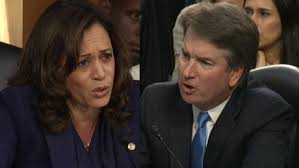 Sen. Kamala Harris has published an old-fashioned book, a "campaign biography," the sort of book that candidates for US president used to write back when people used to read. Nathaniel Hawthorne wrote a campaign biography of Franklin Pierce in 1852, claiming that Pierce was uniquely qualified to be president. How did that work out?

Reviews of Harris's “The Truths We Hold: An American Journey” have not been particularly good nor encouraging. "A meandering work that lacks verve," said The Atlantic reviewer. "A rather clear attempt by Harris to preemptively defend her record on criminal justice, which has emerged as an important issue, especially on the left flank of the Democratic Party," said another, dredging up several instances when Harris defended prosecutorial misconduct as Attorney General of California.

I haven't read her campaign biography and don't plan to. (I'm too busy reading about "The Rise and Fall of the Dinosaurs" and "The Wisdom of Wolves.") But I'm taking note of her aborning candidacy because she's been such a badass in the US Senate. She's an appealing figure and could break out of the pack (a wolf pack, you might call it), and she'll have to deal with those parts of her record that cause doubts.

I'm on that jury, and so far this jury is out.

Posted by J.W. Williamson at 1/13/2019 10:19:00 AM
Email ThisBlogThis!Share to TwitterShare to FacebookShare to Pinterest
Labels: Kamala Harris

I plan to read. She was on fire a few days back on Morning Joe. Made her case quite passionately.