On May 19, 2017, New Orleans Mayor Mitch Landrieu delivered a speech about why he ordered four statues glorifying the Confederacy removed from their public spaces. I think this speech may go down as one of the most profound of the 21st Century.

Over Christmas someone gave me Mitch Landrieu's new book, "In the Shadow of Statues: A White Southerner Confronts History," a book I viewed with skepticism because (1) it's written by a politician and that's often a drag and (2) I knew little of Mitch Landrieu's biography or his politics and doubted he had anything to tell me. I was wrong on both counts.

I feel a kinship with Mitch Landrieu. He's younger than I by many years, but I think we shared some defining history: We were both young in a South that we came to believe was on the wrong side of history. I was young when I decided it was a good thing the Confederacy lost the Civil War, and that thought, even held silently, isolated me from my own working-class culture. 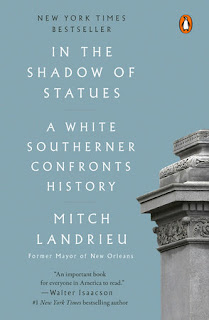 Landrieu was more fortunate, since his father, Moon Landrieu, pioneered the opening up of city jobs for black people when he was also mayor of New Orleans. Mitch grew up in an enlightened white household and went on to become mayor in his own right and take a step that his father may never have imagined, the removal of those symbols of white supremacy that had been erected to maintain the fiction that the Civil War was about honor and gentility rather than about tearing the country apart so that some men could hold others in bondage.

I'm told that Landrieu wrote the speech above. I believe he also wrote "In the Shadow of Statues." (Maybe he had a ghost editor, but I don't think he had a ghost writer.) He's good with words but not in a flashy way. He knows who he is, what he believes, and can express the truth of the moment in clear, straightforward sentences that neither fake human connection nor try to imitate it. By both explicit comment and by implication, Mitch Landrieu may just be the foil for a Twitterman who knows not truth, who has never known it, and who can not speak it on any given day and certainly not under oath.