Blessed Be the Astroturfers!


What's not to enjoy about the following fable? It's got illegal Trump campaign funds. It's got Michael Cohen, Trump's crooked fixer, going into business with Christian operatives at super-Christian Liberty University, first to make himself into a sex symbol and then to make Trump into The Answer. Yum. Failure and hypocrisy on a Biblical scale.

No one has been a bigger Trump supporter and apologist than Jerry Falwell Jr. He's practically turned Liberty University into a neon runway for Trump. Back in the olden times when they were good fellas, employer/employee locked in a pact of mutual protection, Trump's lawyer and right-hand man Michael Cohen accompanied Trump to Lynchburg on his very first visit there in 2012. Cohen, as Trump's mouth, naturally met Liberty's chief information officer, one John Gauger, who was also a young tech hotshot (supposedly) who was also verbally ambitious to get into the politics game. The Wall St. Journal broke the story (behind a paywall, so I'm relying on 2nd-hand replays) that Cohen and Gauger kept in touch for the next six years, with Cohen ever dangling the prospect of big money in a build-up to a Trump presidential campaign.

Cohen was slow to deliver, and first he tested Gauger's talents. Cohen wanted a dummy Twitter account, Women For Cohen (no, seriously), where various professional women publicly celebrated how sexy and irresistible Michael Cohen was, and possibly the greatest legal mind in New Yawk City, all of which was actually written by a female friend of Gauger (presumably also employed by Liberty University?). Apparently, Gauger did alright because Cohen wanted him for another job. It was 2015, the run-up to the 2016 primaries. 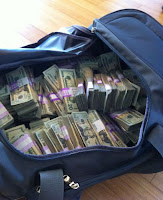 So Cohen made an oral contract [cough] to pay Gauger $50,000 to write computer programs that would vote automatically over and over, simulating the on-line popularity of one Donald J. Trump. First, in 2014 it was a poll for America's "top business leaders" (Trump didn't make the top 50) and then a poll on who ought to run for president. Trump got 5% of that vote. Gauger's tech savvy turned out to be an illusion. And so was the $50,000. Gauger showed up in person at Trump Tower to be paid, and Cohen (should have) said, "You gotta be kidding me!" But Cohen did pay him off -- $12,000 and change, in cash, in "a blue Walmart bag," which also contained (you couldn't make this up) a boxing glove once owned by a famous Brazilian athlete. (Did Cohen know Gauger was somehow a fan, or what? What's the market in Brazilian mixed-martial arts fighter memorabilia?) Anyway, that bag o' cash presumably broke at least two campaign finance laws, and Cohen has incidentally confirmed Gauger's account on Twitter (natch) and said he did all at Trump's direction and for Trump's sole benefit.

(Cohen later made up for stiffing Gauger by giving him work for another client, the chief executive of CareOne Management LLC, a New Jersey assisted-living company that had given Cohen a consulting contract. Gauger created "a positive media presence" for the CEO. Don't know how successful he was or how much he got paid.)

Cherry on This Sundae
Jerry Falwell Jr. is proudly bragging about the entrepreneurial ambition of his chief information officer. He issued an official response to the Wall Street Journal article: "John Gauger is one example among many outstanding LU employees who have made great contributions in their official roles and also enjoyed success as independent entrepreneurs, allowing them to enhance their capabilities and generate more revenue for their families while allowing the University to retain them on our team."