Inman v. Berger Jr. for the "Newby Seat" on the NC Supreme Court?


We previously discussed Phil Berger Junior's intention of running for the Justice Paul Newby seat on the Supreme Court, if (as promised) Paul Newby gives up that seat to run for Chief Justice (which seems likely at the moment). 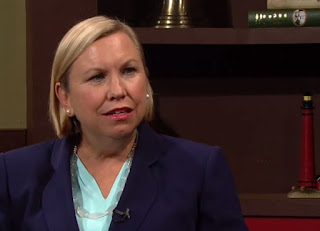 Democratic Judge Lucy Inman, who also sits with Berger Junior on the NC Court of Appeals, just announced that she'll also be running for Newby's seat.

Judge Lucy Inman was elected to the Court of Appeals in 2014. She is the daughter of author Lucy Daniels, the granddaughter of former White House Press Secretary Jonathan W. Daniels, and the great-granddaughter of Navy Secretary Josephus Daniels. Her family famously owned the Raleigh News and Observer from 1894 to 1995.

She worked for a short time as a reporter on the family paper, then entered law school at UNC-Chapel Hill and was in private practice, 1992 to 2010, when she was appointed a special Superior Court judge by Governor Bev Perdue. Four years later she ran for a vacant seat on the Court of Appeals and won.

She's recently suffered a serious storm of mental issues in her immediate family. Last November her son was caught "burning a cross in a Cary park and later making violent threats to a synagogue in Cary, Sha’arei Shalom, which belongs to a branch of Messianic Judaism" (Will Doran). Inman issued a statement at the time: “Our family is inclusive and respectful of all people. Sadly, we, like many families, are dealing in this case with a mental illness, which we recognize and for which we have sought and continue to seek treatment. ... As deeply concerned parents, we apologize profusely to the Jewish community and to all who have been impacted. And we are treating this situation with utmost seriousness.”

Inman's son made a brief appearance with his mother in a 2014 campaign video: