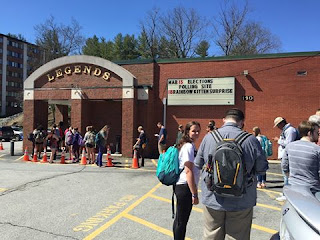 We'll never know the total number of eligible, registered voters in Watauga County who were either turned away at polls because poll workers didn't know the current law or who got frustrated by the incredibly long lines and slow processing and simply gave up.

We'll never know the total number of eligible voters who were trying to register and vote during Early Voting -- which is still the law -- but were refused that opportunity by misinformed poll workers.

The Watauga Board of Elections was unprepared for this primary. During the Early Voting phase at the most popular Early Voting site in the county, the workers could process in only two voters at a time. They should have been processing at least six voters at a time. More computers and/or more staff would have allowed that. Moving more machines or staff from satellite early voting sites where they could nap between voter visits would have helped.

Meanwhile, at satellite sites out in the county, workers were waiting many minutes between voters, but they were equipped with the same number of (under-utilized) computers as the ASU site. Because ... just because.

Provisional ballots: it's still the law, O my brethren, that a duly registered voter can vote out of his/her precinct, and that vote will count, but some poll judges were telling out-of-precinct voters that they had to go to their assigned precinct and that a provisional out-of-precinct ballot wouldn't be counted. Those poll workers appeared to be telling that false tale most frequently to young voters.

We can't help thinking -- because we're as prone to conspiracy theories as your average Trump supporter -- that delays, frustration, headaches, long lines at the polls are deliberate strategies for discouraging participation. It's only going to get worse in November, which will be the first opportunity in four years for the citizens to throw out of office the very people who have engineered this scenario.

FOOTNOTE
North Carolina election law expert Gerry Cohen has done some stats on how NC college students were voting in the primary. This bit is particularly interesting:

The Republican students at ASU that I personally talked to during Early Voting all said without exception that they hated Trump and would never consider voting for him.

The Democrats are not the only major party with potential generational problems.