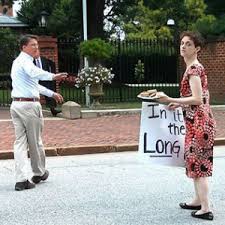 I rarely say that something is "a must-read," though I think it often, and I'm thinking it strongly this morning about Rob Schofield's further exploration of the sweeping rewrite of our laws passed as House Bill 2 last week and signed by a befuddled governor who has bled nothing but support since he put pen to paper.

HB2 is, in Schofield's summation, "a truly stunning and almost unfathomable development – at least at first blush. A modern American state has enacted a sweeping statute that takes its law backward on a fundamental premise of human and civil rights (the right not to be fired because of your race, sex or religion) to the mid-20th Century (and maybe even the mid-19th Century). What’s more, it has done so with the ringing endorsement of conservative Christian advocacy groups – groups whose members are now, as a result, expressly unprotected in state law because of their religious beliefs!"

While national businesses and non-profit groups have roundly condemned the North Carolina General Assembly and especially our poor dumb governor, the North Carolina Chamber of Commerce has been very obviously and strangely silent on the law. Schofield reasons -- correctly, we believe, that the Chamber of Commerce "was bought off with the broad language added to the bill at the last minute to deep-six local living wage ordinances and to bar all state court lawsuits against employers who fire workers for discriminatory reasons."

Is the Chamber of Commerce willing to countenance blatant discrimination in order to gain more power over their workers? Apparently so.

By the same token, conservative Christians either haven't noticed that they are also exposed for unequal treatment by HB2, or they held their fire on giving away the right of their members to sue for discrimination, suggests Schofield, "so that [they] could pursue [their] longstanding holy grail of keeping LGBT persons marginalized and unequal."

An unconstitutional aroma continues to hang over this pile of legislative crap. The more we know about it, the more we smell the ugliness.

There must have been some big promises made to McCrory and Moore to push this bill through. Years from now, we may discover that certain evangelical groups promised voter turnout or financial support for their part of the law and the Chamber or specific business figures promised campaign contributions or other favors in return for the remainder of the bill.

Something's rotten in Denmark. And it ain't stinky cheese.

Have you read the comments sections of the NC news stories on this? Or the comments on the governor's FB page? There is BIG SUPPORT among the GOP base for this move. McCrory is running for reelection. He's doing what he can to get his base energized - including LYING about the purpose of this bill - "saving women and children from being forced to invite men into public ladies rooms."

Franklin Graham's tweets on this prove conclusively that he runs Samaritan's Purse as a political organization, not a charity. Here's to hoping that the IRS removes the non-profit tax exemption from anything touched by Franklin Graham.

Read the bill: Private companies can provide whatever bathroom facilities they believe appropriate. The bill prevents Charlotte and any other local jurisdiction in NC from mandating what kind of restrooms (men's, women's, unisex, etc) private businesses must provide.