On their way to stomping on Charlotte for its LGBT protection ordinance -- a rare special session of the General Assembly called today by its Republican overlords -- the Raleigh junta has decided to go much further in a law they promise to ram through both houses in a matter of hours. McCrory has indicated that he doesn't want to sign it, but he will. 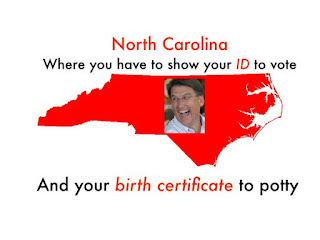 Not only will lawmakers determine who can go to what toilet all across the state, but they will also “define” transgender people out of existence. The draft bill (linked above) defines “biological sex” as “the physical condition of being male or female, which is determined by a person’s birth certificate.”

I'm not making this up. A meme has already emerged to highlight the absurdity of the General Assembly's overreach.

But wait. That's not all. The draft bill would also bar all local governments from enacting living wage ordinances. Just when you think the Republicans can't -- or won't -- go further in their hunger for absolute power, they go further.

Can November please get him sooner?

There is nothing conservative about these people. They are radical interventionists in local affairs and completely in the sway of corporatist domination. What will happen if T-rump gets to be president is truly terrifying for our state and nation.

Orange County's 20-year-old Civil Rights Ordinance that provide for nondiscrimination on the basis of familial status and veteran status would also be invalidated by the law. And it puts $4 billion in Federal education funding in jeopardy under Title IX.

such 'laws' openly defy what might be called common sense.
bundling works well in bargaining but not in making law where it displays corruption and smoke filled rooms.
in this 'bathroom' case government efforts, for whatever reason, to give a minor group of confused the option to continue their masquerade in public, will cause a greater number to be, at best uncomfortable, and possibly unsafe.

It seems that other Republican controlled legislators are ramming through similar laws. Which plutocrat is behind all these ham-fisted attacks on freedom?