There Is Such a Thing as Cosmic Irony 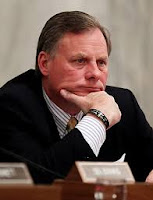 Senator Richard Burr ("Not a Career Politician") had to vote a provisional ballot because he lost his photo I.D. He also had to fill out the "Reasonable Impediment" form and check a box for the reason he didn't have acceptable photo I.D.

Burr is one of 600 in North Carolina who had to fill out the "Reasonable Impediment" paper, the fudging of the photo I.D. law passed by the Republican General Assembly last year to avoid having their law thrown out altogether by a Federal judge.

This wholly ironic development led Dan Blue III to post on Facebook: "'The arc of the moral universe is long, but it bends towards justice.' That, and life has a wicked sense of humor."