Governor Bumble, In Over His Head 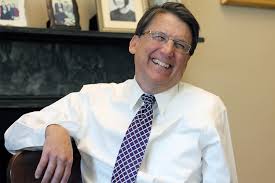 The governor couldn't answer a yes-or-no question about HB2's effects some five days after he signed the bill, saying the question blindsided him. Shame on the liberal media for asking a question that blindsided the governor! But thanks for doing your job, "Liberal Media," in giving McCrory the obvious target for all his problems with the facts. It's all the liberal media's fault.

McCrory's now infamous "Myths & Facts" sheet about HB2, which was sent out to the universe by every department in McCrory's administration, claimed that HB2 took away no existing protections for individuals in the state of North Carolina. WRAL fact-checkers gave that claim, and the rest of the governor's "Myths & Facts" sheet, the lowest rating on their fact-check scale -- "a moving violation."

We have to guess that those wily foxes in the General Assembly made certain representations to McCrory about the bill they passed after scant hours of its being introduced, without allowing for public input or even calm reflection, and our poor dumb governor bought the spin. It's almost as though the Big Boys in the General Assembly really want to see this man defeated in November. They certainly seem to enjoy seeing him twist in the wind.

We borrow from Dickens' character Mr. Bumble: If McCrory believes what's coming out of his mouth these days, he is a ass, a idiot.

McCrory is a liar - plain and simple - or he's too dumb to read and understand the law he just signed.

His choices are to dig in his heels and continue lying or suddenly come out and say he was "mislead" about what was in the law, trying to deflect the spotlight to Speaker Moore.

So, Roy Cooper, NC attorney general refuses to defend state from HB2 legal challenges.... which leads to Sen. Phil Berger calling for Cooper to step down if he is not going to bide the will of the state... ah yes, our next governor hammers another nail in the lid of the one term loser ~

Criticism of the law continues to roll in - this piece highlights part of the law that would impact every employee in North Carolina.

It doesn't happen often, but when an AG knows a law is unconstitutional he can choose not to defend it. A SENSIBLE legislature gets better legal advice BEFORE passing sweeping legislation like this...it doesn't push it through hurriedly simply because ALEC and Art Pope say to do it.

Cooper is toast, This issue alone will cause him to lose next November.

Vitriolic invective and personal insults aimed at your political opponents seems to be the stock and trade of many who post here. There are good arguments to be discussed, both pro and con, on the merits of HB2 or the lack thereof. But most partisans just resort to over-the-top name calling rather than a rational, measured debate. Such harmful diatribes should be condemned, but I doubt one will find much of that on this blog.

Rex, I might if I thought you could resist the personal insults and invective when you find we do not share similar views or values. In the meantime, there is a good debate on these issues currently going at PoliticsNC. Most posters there are liberals, but there are one or two articulate conservatives posting there. So be warned-- you might be exposed to those with a different point of view from conventional liberal wisdom.

Still waiting for those good "pro arguments". Please don't project your "insults and invective" onto me. "Conventional liberal wisdom" is wisdom. On that point, I agree.

DR, looks like another condescending conservative who comes on here to "educate" and insult us, but then runs away pretty fast!