The Big-Money Boys Behind Soucek and Whatisname 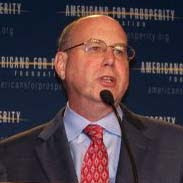 The largest super-organism on the planet is a fungus found in the Malheur National Forest in Oregon. It underlies some 2,200 acres. Art Pope is something like that fungus. He founded the right-wing "think tank," the John Locke Foundation, which pumps out "studies" that consistently prove that government regulation of corporations is evil, that welfare for the non-rich is a cancer on society, and -- most recently -- that "green power" from wind and solar is a threat to liberty. The John Locke Foundation runs its own magazine, The Carolina Journal, and at least six different blogs around the state. Ole Whatisname, who's running against Cullie Tarleton for the N.C. House, was actually a salaried employee of the John Locke Foundation, helping to produce such bilge.

Other "fruiting" arms of the Pope fungi include the John William Pope Foundation (named for Art's father), the John William Pope Civitas Institute (which handles a polling operation that has been very active in the field for Soucek and Whatisname), and the North Carolina Institute for Constitutional Law, which handles lawsuits which seek to advance the Art Pope vision by challenging laws that hobble big corporations.

Art Pope is a director of the right-wing group Americans for Prosperity, which organized the Tax Day Tea Parties across the country and the "town hall" opposition to health care reform in 2009. He had a big hand in the take-over of the Wake County School Board last fall, and is now a major bankroller of Real Jobs NC, which is trying to knock off Cullie Tarleton and Steve Goss (and several other Democrats in the General Assembly).

Tarleton and Goss have been targeted by a high-dollar campaign of push-polling, TV ads, and a flood of direct mail because they represent districts with many low-information voters easily stampeded (the Pope fungi believe) by distortions and lies.

What is Art Pope for?
Art Pope heads Americans for Prosperity, whose parent organization, Citizens for a Sound Economy, supported legislation to normalize China's trade relationship with the United States, according to Real Facts NC. North Carolina has lost at least 95,100 jobs due to unfair trade with China since 2001, according to the Economic Policy Institute.

Americans for Prosperity strenuously opposed the recent Wall Street financial reforms which attempt to strengthen consumer protection and stop future bailouts by preventing the kind of shenanigans that led to the recent financial crisis ... reforms which Art Pope apparently finds a threat to life as he's known it.

Art Pope has long been critical of public education and supports vouchers and "school choice," which is exactly what his new Wake County School Board is now attempting to deliver in the form of a giant wrecking ball.

Pope also naturally supports the privatization of Social Security and phasing out Medicare in keeping with the Pope philosophy that any "welfare" programs just coddle the poor and hamstring the rich.

This is the man to whom Dan Soucek and Whatisname will owe their fealty if they're elected to the N.C. General Assembly.
Posted by J.W. Williamson at 10/01/2010 09:09:00 AM
Email ThisBlogThis!Share to TwitterShare to FacebookShare to Pinterest
Labels: Art Pope, Cullie Tarleton, Dan Soucek, John Locke Foundation, Jonathan Jordan, Steve Goss

Again, how is this any different than what Tarleton did in the race with Wilson?

Yep, I got an attack piece against Steve Goss in the mail today, I suppose everyone is being bombarded by this cr*p. The Raleigh return address checks out as...the John William Pope outfit. "Tax Dollars for Politicians" is the "shameful and wrong" thing Steve is alleged to have done. That of course could mean anything, from collecting per diem to go to Raleigh to collecting a salary for serving his constituents in the Senate. If you go to the Civitas website there's nothing there about any of that. Steve's voting record is actually over 1/3 "conservative" by their own tally. But, gotta get him out of there, Steve thinks for himself, he's not a docile stooge for the right wing agenda.... Meanwhile the PRIVATE dollars from Civitas Action and Americans for Prosperity are swamping the district and skewing people's perceptions. Wake up, Watauga! Outside agitators are trying to take over your voice.

smarter than a democrat said...

And again, how is this any different than the main street media does in the way of what they like to call "objective reporting." What a joke - CNN, MSNBC, ABC, and CBS are all in bed with democrats and "Potentate Obama." There is no more big money in republican races than there are in democratic ones, so get over it!!!

My wife received a call from a pollster promoting Tarleton. Where is the outrage over this poll?