Carry Him Back to Old Virginny 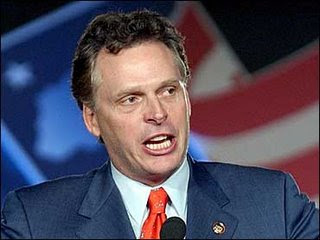 Remember Terry McAuliffe, former chair of the Democratic National Committee? McAuliffe played the Black Knight for Sen. Hillary Clinton during the primaries of 2008:

Ah, "Monty Python and the Holy Grail" taught us so much about life!

Even while McAuliffe was stubbornly refusing to admit that Sen. Clinton was losing the Democratic presidential nomination, he was planning his next political circus, and now he's come right out and announced that he's running for governor of Virginia.

We wish him well. We wish the state of Virginia well, since it's now a fellow blue state. And we thank God we receive no television feed from the Old Dominion and will not have to listen to those inevitable McAuliffe 30-second spots, which will seem much longer by the time he ceases to talk.
Posted by J.W. Williamson at 1/04/2009 11:57:00 AM
Email ThisBlogThis!Share to TwitterShare to FacebookShare to Pinterest
Labels: Terry McAuliffe