With Language as a Tool 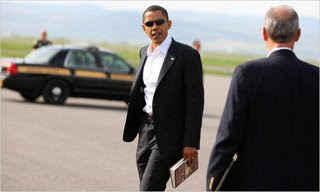 The book that Barack Obama is carrying in this photograph is Fareed Zakaria's "The Post-American World." That Obama is a deep reader of many texts is on fascinating display in Michiko Kakutani's analysis of the man's immersion in language in today's NYTimes.

He knows his native tongue as a means for thinking through complex problems, as a tool for lifting the spirits, as a pry-bar for opening up the puzzling ambiguities of human beings. It's his immersion in language that allows him to reach those who want to hate him.

And won't it be something to have a president who speaks and writes with precision and insight and who is NOT a victim of grammar and logic and syntax?
Posted by J.W. Williamson at 1/19/2009 10:12:00 AM
Email ThisBlogThis!Share to TwitterShare to FacebookShare to Pinterest
Labels: Barack Obama