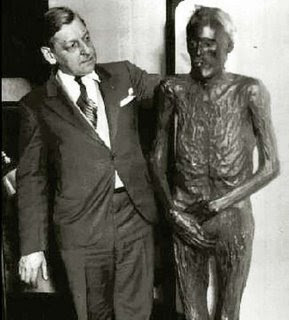 As predicted down-column, it's Michael Steele on the 6th ballot.

Came down to a contest between Steele and South Carolina's Katon Dawson, who was apparently the favorite of the party's most conservative elements.

One North Carolina conservative sounds unhappy at the prospect of Michael Steele, whom she labels a "squishy moderate" and then a "main street Republican" (apparently, that's a bad thing) but then backpedals and says she's happy happy happy to have any new chair of the Mummy Party.

Looks like a lot of the same old dust to us. But time will tell, as it always does with mummies.
Posted by J.W. Williamson at 1/30/2009 04:31:00 PM
Email ThisBlogThis!Share to TwitterShare to FacebookShare to Pinterest
Labels: Katon Dawson, Katy's Conservative Corner, Michael Steele, National Republican Party