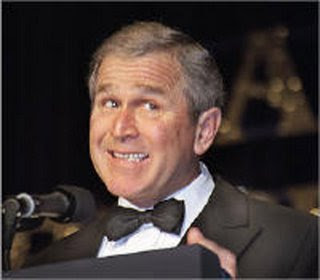 In November 2004, George W. Bush had just won reelection, and I reacted as honestly as I could in an essay that was published here on Watauga Watch. Now that the Bush disaster –– I mean, presidency –– is finally over, I thought it might be useful to review that column for its prophetic accuracy.

FYI, my kids are now 7 1/2 and 4 1/2 years old, respectively. They managed to survive the Bush presidency, although not unscathed. Fortunately, each is happy and healthy, still too young to know what they've actually managed to live through. But they're also much poorer than they would have been had someone else –– probably anyone else –– been elected in 2000 or 2004.

Thankfully, I was wrong in my prediction that we'd be attacked again on our soil by al Qaeda. There has not been another attack against America on our soil under the Bush presidency, and Bush takes credit for this every chance he gets.

Frankly, he does deserve some credit but maybe not as much as some think. I've read numerous accounts of al Qaeda –– what its goals are and how it operates. Each attack, they think, must be bigger and more dramatic than the last. The first time al Qaeda attacked us on American soil was in 1993. The next time was in 2001. That eight-year gap gave them time for something much bigger and more horrific.

It's now been about eight years since 9/11. Had we done nothing to weaken al Qaeda in America, it'd be just about time again for another major attack.

You might say that George Bush gave al Qaeda a much easier way to attack us, not here but in Iraq. The group known as "al Qaeda in Iraq" did not exist until our invasion, and there simply was no al Qaeda presence in Iraq prior to 2003 when we started the war. Now that we are there, so too are they, and Americans have paid with their lives.

We didn't start another war against a country not involved in the 9/11 attacks, as I thought likely. But the Iranian influence in Iraq and in the Middle East is far greater now, and Bush policies are the proximate cause. "The Iranian problem" is being passed on to President Obama, along with the Israel-Palestinian conflict.

Sure enough, we've swelled the ranks of al Qaeda, creating more enemies and putting our country at greater risk. U.S. intelligence shows that al Qaeda is stronger and larger now than on 9/11 and is operating freely in portions of Afghanistan and Pakistan.

The rest of my predictions were 100% accurate. Bush gave us Justice Samuel Alito and Chief Justice John Roberts. These two individuals are young and healthy and will continue to push the Supreme Court to the right for decades to come.

Medicare and social security are still in deep trouble. The gap between the rich and the poor is greater than ever. Poverty, child poverty, true unemployment, and the number of people without health insurance have increased steadily throughout the Bush Administration.

The Environmental Protection Agency was reduced to a good old boy hangout, just like FEMA, and now plant and animal species are threatened. Further, literally nothing has been done to reduce our reliance on foreign sources of energy. Funding for education (and for just about every social service) is in serious jeopardy. Cuts are occurring everywhere.

We are less free because of the USA PATRIOT Act (now permanent law), domestic eavesdropping/warrantless wiretapping (in violation of U.S. law), the suspension of habeas corpus, the detention of US citizens as enemy combatants, and the official use of torture as part of the war on terror.

What I was probably most wrong about was that George W. Bush would finally be forced to take responsibility for all of this. Just the other day, Bush held a farewell press conference, saying he was disappointed that we did not find weapons of mass destruction in Iraq and that one of his greatest mistakes was hanging that "Mission Accomplished" banner on the aircraft carrier. What a warped sense of morality this guy has!

The last four years of the Bush Administration did in fact give us tens of thousands of Americans who are poorer, more uneducated, more uninsured, more polluted, sicker, more threatened, definitely more hated, more monitored by Big Brother, and even deader. But thankfully, I was also right that the last four years of George W. Bush shifted the political pendulum to the left.

We can credit George W. Bush for giving us a black man named Barack Hussein Obama, the 43rd President of the United States of America. Think about it –– would this have been even remotely possible without a George W. Bush presidency?

Now Democrats and Republicans of good will can get back to fixing the problems thrust upon us by eight years of the Bush Administration.

And I'm feeling much better now!
Posted by J.W. Williamson at 1/16/2009 08:55:00 AM
Email ThisBlogThis!Share to TwitterShare to FacebookShare to Pinterest
Labels: Bush administration, George W. Bush