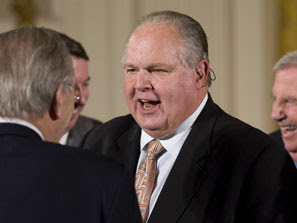 Rush Limbaugh is riding high, buoyed by his daily ability to be outrageous and get liberals all upset at him so that he can then play the victim of a liberal witch-hunt (uh, make that a "liberal Pillsbury dough-boy hunt").

So one day he says he hopes Obama fails.

Then yesterday he said that Republican leaders in Congress were essentially girly men.

This afternoon Rep. Phil Gingrey, R-Ga., a very conservative member of the House, shot back and suggested that Limbaugh shut his fat trap. Rather, Gingrey essentially said that Limbaugh is out of touch:

You know you're just on these talk shows, and you're living well, and plus you stir up a bit of controversy and gin the base and that sort of thing.

In other words, Limbaugh's a dilettante? Instead of The Most Important Conservative Philosopher in the History of the Universe?
Posted by J.W. Williamson at 1/27/2009 06:02:00 PM
Email ThisBlogThis!Share to TwitterShare to FacebookShare to Pinterest
Labels: Phil Gingrey, Republican "brand", Rush Limbaugh