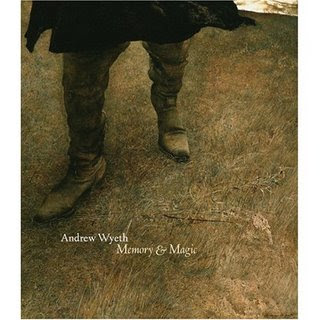 We treasure it as one of our enduring memories -- a few years back, during to visit to Chadd’s Ford, Pennsylvania, we stood in front of many Andrew Wyeth paintings in the halls of the Brandywine River Museum. I’m no art critic (duh), but those “images of absence, silence, loss, abandonment, desolation but also expectation” (as Michael Kimmelman described them in the NYTimes yesterday) moved me like few pieces of art have ever moved me.

It had long since been unfashionable to admire Andrew Wyeth in the art world. He was considered old-fashioned, even sentimental, definitely “conservative” (he was well known for having voted for both Richard Nixon and Ronald Reagan), but I found his realistic images of a rural landscape ... dark and astringent and mysterious and spiritually deep. You could almost feel yourself falling against your will into those paintings, sucked into a reality that was both beautiful and foreboding.

This will sound passing strange, but those canvases (some of them quite huge) offered an experience like the unthinkable temptation I’ve heard one person express about being in a busy subway station, with trains roaring in and then out again, and with people jostling to get on ... the vortex of the tracks themselves, the almost irresistible pull of the edge of the platform. “I don’t like subway stations,” she said to me, “because I think I might throw myself on the tracks.” That was Andrew Wyeth’s paintings for me: a seduction that I could not resist, something both dreadful and very sexy.
Posted by J.W. Williamson at 1/17/2009 11:44:00 AM
Email ThisBlogThis!Share to TwitterShare to FacebookShare to Pinterest
Labels: Andrew Wyeth