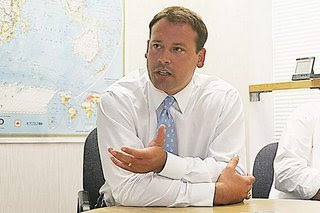 We've barely gotten one election past us, and there're people already talking about Richard Burr's U.S. Senate seat in 2010, and truth to tell (hang on to your gag reflex!) we're just a year and a month away from the candidate filing period for the 2010 general election.

Yesterday the Hendersonville Times-News runs a long article essentially beating the drum for Shuler to take on Burr. Shuler, after easily winning his first reelection race against a weak if not unstable opponent, seems more than willing for people to puff up his ego even further than he's puffed it up himself. "Heath the Giant Killer."

Now this morning, Public Policy Polling is up with a post seconding the Shuler nomination, saying that the only state-wide Democrat who could rival him as a winning Senate candidate would be Attorney General Roy Cooper. PPP takes it a step further by helpfully mentioning a couple of local state legislators who could handily win Shuler's House seat, if he vacates it to run for Senate. This we doubt, though PPP's statistics are impressive about how both of Shuler's potential replacements in the NC-11 did in their own reelections.

But leaving a now strong Democratic seat open in the overwhelmingly Republican NC-11 looks mighty iffy to us, though (okay, we'll admit it) we thought a candidate named Hagan had exactly no chance in 2008.
Posted by J.W. Williamson at 11/15/2008 11:39:00 AM
Email ThisBlogThis!Share to TwitterShare to FacebookShare to Pinterest
Labels: Heath Shuler, Kay Hagan, Public Policy Polling, Richard Burr