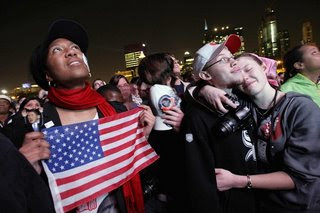 I was not emotional last night, even surrounded by 400+ delirious people at the Dragonfly Theater. What a crowd. What a diverse crowd.

I didn't begin to allow the emotion to well up until we were home and watched Barack give his acceptance speech. It wasn't the speech so much, though that was SOMETHING, but it was the sight of the Obama/Biden extended families taking the stage that caused me to lose it. This morning I've been gazing on the hundreds of still photographs from across the nation last night, and I can't seem to stop crying. (The N&O has some wonderful shots, including pics from Republican HDQs in Raleigh last night, which tell their own story, and the Chicago Tribune has both its own slide shows and reader-submitted photographs galore. You can find many such selections on other sites.)

Nothing (for me, at least) captures the human story of what actually happened in our nation last night like the photographs.

I began this blog five years ago, angry and burdened by the direction our president ... what was his name? ... was taking our country. I'm so thankful to be able to let whatisname go quietly to his dusty sub-basement of American history, and I can shift my burden (comes complete with a well-rubbed strand of worry beads) over to you folks out there who seem to expect, even demand your own personal anti-Christ. Now you can fret and start your own blogs. Here's a title for your first posting: "The Failed Obama Presidency."

It took me several months to come around to thinking that Obama could actually do it, do the impossible, do the unprecedented. Now that he's done it, with solid majorities in both popular and electoral votes (no Supreme Court appointments here, thank you!), I think it unwise for anyone, be it domestic racist or foreign terrorist, to underestimate this man.
Posted by J.W. Williamson at 11/05/2008 10:05:00 AM
Email ThisBlogThis!Share to TwitterShare to FacebookShare to Pinterest
Labels: 2008 election results, Barack Obama