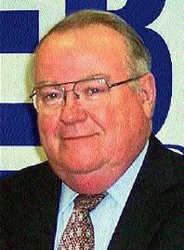 Hugh Webster, the Republican congressional candidate who ran against Congressman Brad Miller in the NC-13 (and was soundly defeated 65% to 35% on Nov. 4), has been accused of stealing over $12,000 from his elderly aunt. Webster was also a member of the NC Senate, infamous for passing out stickers that read "Can't Feed 'Em, Don't Breed 'Em" a decade ago, a not-so-oblique reference to people on welfare.

He's accused of inducing his elderly aunt to withdraw $12,115 from a retirement account and giving it to him, after he told her he could get a higher interest at his Raleigh credit union. According to an affidavit written by a State Bureau of Investigation agent, "She never received any interest or bank statements."

Webster says the money was a gift. The aunt says not so.

Then Webster said the indictment stemmed from a financial dispute with the aunt. "It will be very easy to discredit her," he said. Nice guy, this!

Then he said the charges were politically motivated: "I was the only one who had the guts and the integrity to stand up and tell the truth in the legislature."