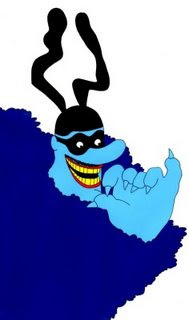 Contained in that (still anonymous) blog posting (so brave!) is this first-hand account of what it was like inside the Raleigh Hilton last Tuesday night during the GOP "victory celebration." This is "local color" we didn't get from any mainstream reporter:

On one side of me, Bev Perdue was on TV giving her victory speech. On the other side of me, another TV was showing a map that made the U.S. look like it was flooded -- a blue tide was spilling over the coasts, flooding the heartland and drowing our own beautiful North Carolina. And in front of me was a third TV on which several commentators were discussing what Elizabeth Dole did wrong.

And standing at a podium giving a "rah, rah" speech was our own Linda Daves, seemingly oblivious to the catatonic stares on the faces in the crowd -- all desperately wondering if someone got the license plate of that big blue truck that hit us.

The only thing missing was a melting podium and funky looking trees. Believe me, they would have fit right in, because out party was melting before our eyes. Melting into a puddle of gelatinous ooze with no spine, no shape, no form, and no future. And Linda Daves was giving a "go team go" speech.