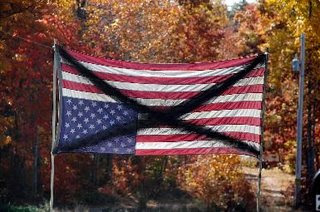 Everything you needed to know about the lethal split in the Republican party was summed up in that snide comment about Sarah & Todd Palin, leaked to the press from a high-up in the McCain campaign a day after the election:

That word opened the door wide on the true contempt that the current rulers of the GOP harbor for the back-country troops that they regularly rile up with gays, God, and guns, just long enough to win an election, and then continue to ignore or take for granted until the next electoral contest.

The use of that word hillbillies, along with the other garbage about Palin that got dumped into the media bloodstream immediately following the McCain defeat, was clearly meant to destroy her forever as a credible national leader. That speaks to how much the GOP power elite actually fear the great unwashed hoards of their own Huns.

This a.m. Craig sent me a link to an anonymous essay ("Sarah Palin Is the Future of Conservatism") by a political consultant who digs deeper into the Republican Party's Palin problem:

Within the hierarchies of the old right, Sarah Palin's style of pseudo working class conservatism was reserved for the proverbial back of the bus. Her type was not to speak, but to be spoken to; they were assigned to work as the foot soldiers in campaigns and be ignored until the next election.

But as social divisions widen and opportunity declines, there will be an ever-decreasing market for the type of homely business conservatism dished along with breakfast at the local Chamber of Commerce or Rotary Club. The style of conservatism that Sarah Palin represents will be the only one that has a majoritarian future in today's America. The populist conservatism will be openly hateful, paranoid, anti-intellectual, belligerently militaristic and most significantly ideologically inconsistent and opportunistic.

Hateful, paranoid, anti-intellectual ... you get the drift of where we're headed?

If you need a stronger hint about the forces the GOP has always felt privileged to toy with but which Palin may unleash for real on us all, the Stokes County resident who erected a big upsidedown American flag the day after the election, and then spray-painted a giant 'X' through the whole thing as a symbol of his hatred for Obama and for all who voted him into office, might be instructive. That's a photo above (from the W-S Journal) of the man's hateful, paranoid, anti-intellectual touch-up of the American flag. The violence of the emotion behind it is perfectly clear.

Sarah Palin is that man's hero. She will have her revenge on the Republican power elite, you betcha, and she may cause the Stokes County flag-displayer to have (a somewhat peculiar) love well up in his heart again.
Posted by J.W. Williamson at 11/08/2008 11:21:00 AM
Email ThisBlogThis!Share to TwitterShare to FacebookShare to Pinterest
Labels: National Republican Party, racism, Sarah Palin