Jerk, To the End 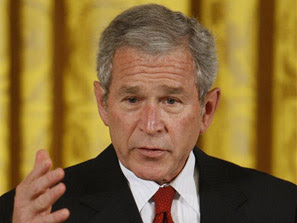 Rules that will make it easier for polluting industries to pollute.

Rules that will make it harder for women to get federally funded reproductive health care.

Rules that will change the way regulators assess risk for jobs, especially those that expose workers to chemicals.

Rules to make it impossible to sue in state courts for negligence on the part of manufacturers.

Rules making it tougher for employees to take family or medical leave.

Rules that would effectively gut the Endangered Species Act.

And our personal favorite:

Rules to ease restrictions on coal companies that decapitate Appalachian mountains to get at the coal underneath and then push the waste dirt and rock into neighboring creeks.
Posted by J.W. Williamson at 11/20/2008 09:07:00 AM
Email ThisBlogThis!Share to TwitterShare to FacebookShare to Pinterest
Labels: George W. Bush