The Tea Party Shall Go On 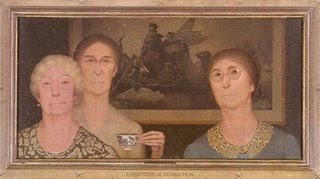 A lengthy article in the Henderson Times-News, prompted by the county's turning blue (for Congressman Heath Shuler) for "the first time in decades," allows for some lively chat about what 11th Dist. Republicans need to do to come back. Answer: Don't change. Become more like what we were. Generally makes the Republican Party seem like a teabag left to steep past the time the water turned cold.

...the party needs to look at ways to modernize its campaign strategy and bring good candidates to the voters. --Brent Woodcox, North Carolina Republican Party spokesman

"The Republicans do not need to broaden their tent. The Republicans need to return to the very simple principles that Ronald Reagan ran on, that our local and state officials still run on." --Danos

"There are discussions of [whether] the party should move more left or should the party move more right. I don't think that is productive .... We need to apply conservative principles to everyday problems for North Carolina." --Woodcox

"Do they believe in more populism, like Sarah Palin and Joe Six-pack, or are they going to be more intellectual and argue for smaller government?" --Gibbs Knotts, political science professor at Western Carolina University

...the challenge is to define what the party stands for and not what it opposes. --Knotts