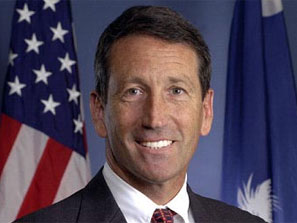 The Republican Governor of South Carolina, Mark Sanford, oft-mentioned these days as a potential new leader of the disgraced GOP, opines about the future of his party at Politico.com and not only agrees with other leaders who are calling for MORE conservatism but also ups the ante slightly by dissing El Presidente's "compassionate conservatism" as mere window-dressing that didn't fool anybody and by actually calling for a purge of moderate or "fake conservative" elements in the party. He doesn't name names, naturally, but we wonder who he's talking about. Could it be Sen. John McCain who needs ousting? Maybe the two Maine senators, Olympia Snowe and Susan Collins, whose "moderation" famously led them to vote against the conviction of Pres. Bill Clinton in his impeachment.

If it would be of any help to Gov. Sanford and his fellow travelers, we would be glad to begin work on a short list of prominent Republicans who look suspiciously non-doctrinaire, "persons of interest" whose very presence in the GOP is simply (probably) holding everybody back.