Conservatism: Waiting For a Tow 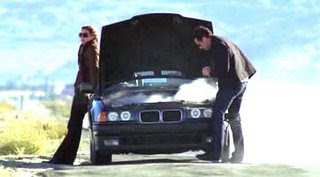 Some of the most interesting reading these days is found on conservative blog sites, and we're particularly alert to more calls for "purges" of weak-kneed sisters in the ranks who dared vote for one or another of those Bush initiatives that are now seen as conservative heresy.

Erick Erickson at RedState, for example, who wants to separate the conservative "movement" from the Republican Party (since look where being joined at the hip got them all!) and who uses the "p" word ("purge ... purge") twice, along with the metaphor of "dead wood" for describing Republican/conservative leaders whose leadership is no longer required (and by "dead wood," Erickson is apparently not referring to the impenetrable space between Sarah Palin's ears but to certain unnamed "conservative" orgs and unnamed Republican members of Congress who need to be disappeared as soon as possible).

As a spectator sport, the philosophical advancement toward hari-kiri on the Right has been even more fascinating than we could have hoped for, and no one's even been bled out yet. We're avidly waiting to see whether "the movement" can squeeze itself down into the number of people who'll fit comfortably inside a walnut shell.

NOTE TO PURGERS: Sen. Saxby Chambliss voted FOR the Bush/Paulson bailout, than which there can hardly be a greater conservative heresy. Yet there was Sarah Palin, the Doofus Darling, campaigning for Chambliss all over Georgia yesterday, proclaiming him conservatism's savior and -- naturally-- a "maverick" in the Senate.
Posted by J.W. Williamson at 12/02/2008 11:10:00 AM
Email ThisBlogThis!Share to TwitterShare to FacebookShare to Pinterest
Labels: conservative movement, Erick Erickson, Sarah Palin, Saxby Chambliss