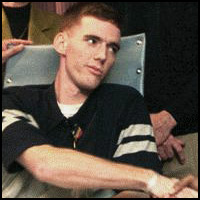 This news was broken yesterday afternoon on NCBlue by Jerimee. We had reported the rumors here months ago that Navy Marine Corps Medal winner Daniel Johnson might challenge Patty McHenry for his seat in the NC-10. We're happy to say that Johnson is now officially in the race.

(The picture to the left apparently dates from the time Johnson lost limbs saving the life of a fellow sailor off the Korean coast.)

Johnson has been working as an assistant district attorney in Wake County and has moved back to his hometown of Hickory to run against McHenry ... whose toes must be curling this morning inside those loafers he wears.

Now the two "safest" Republican congresspeople from N.C. have Democratic challengers to call them on their votes and criticize their general behavior.
Posted by J.W. Williamson at 10/25/2007 11:13:00 AM
Email ThisBlogThis!Share to TwitterShare to FacebookShare to Pinterest